Tokyo Olympics: Lovlina Borgohain became the third Indian boxer to win a medal at the Games, winning bronze in her category. She was given a warm welcome upon her return to Assam. 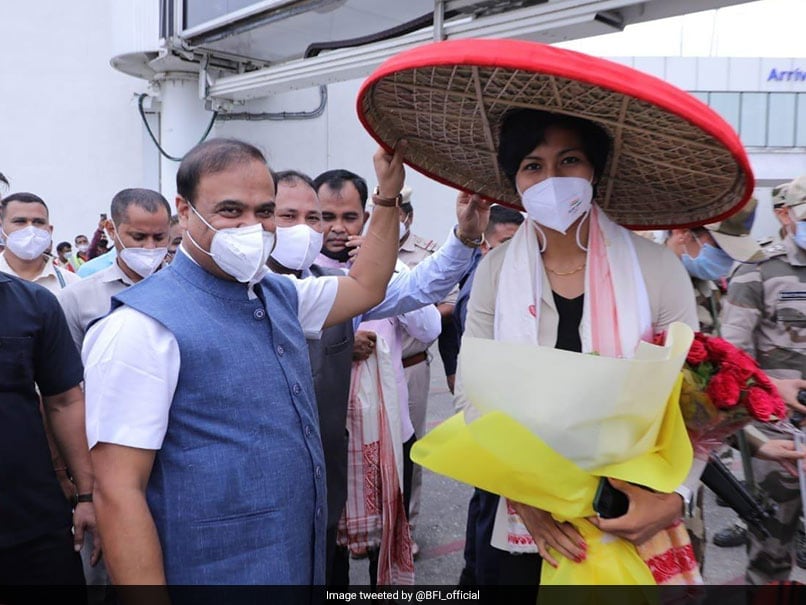 Olympic bronze medallist Lovlina Borgohain arrived on Thursday to a warm welcome as Assam Chief Minister Himanta Biswa Sarma received her at the airport. Borgohain, who clinched the welterweight (69kg) bronze, is scheduled to be felicitated by the state government in the afternoon. As she glided down the steps of the aircraft, Sarma patted Borgohain on the back, before presenting her with the traditional Assamese "gamosa" (hand towel), "japi" (head gear) and a bouquet. "With pride and glory, I welcomed our star Olympian medallist Lovlina Borgohain at Guwahati airport. Lovlina has ignited a billion dreams with her success at the Tokyo Olympics, and set an example for budding sports talents in rural areas to aspire to achieve big at the world stage," he said.

The 23-year-old boxer then boarded a bus, customised with huge cut-outs of her, and headed to a city hotel where she will rest before being felicitated by the Assam government at the Srimanta Sankardeva Kalakshetra later in the day.

Borgohain is also slated to meet Governor Jagadish Mukhi in the evening.

She will, however, not visit her village Baromukhiya in Golaghat during this visit, but return to Delhi to attend the Independence Day event where Prime Minister Narendra Modi is scheduled to meet Olympic medallists.

Comments
Topics mentioned in this article
Lovlina Borgohain Olympics 2020 Olympics India
Get the latest updates on IPL Auction 2023 and check out  IPL 2023 and Live Cricket Score. Like us on Facebook or follow us on Twitter for more sports updates. You can also download the NDTV Cricket app for Android or iOS.