Lovlina Borgohain said she will take take a holiday after her Tokyo Olympics bronze before starting preparations for the Paris Games in 2024. 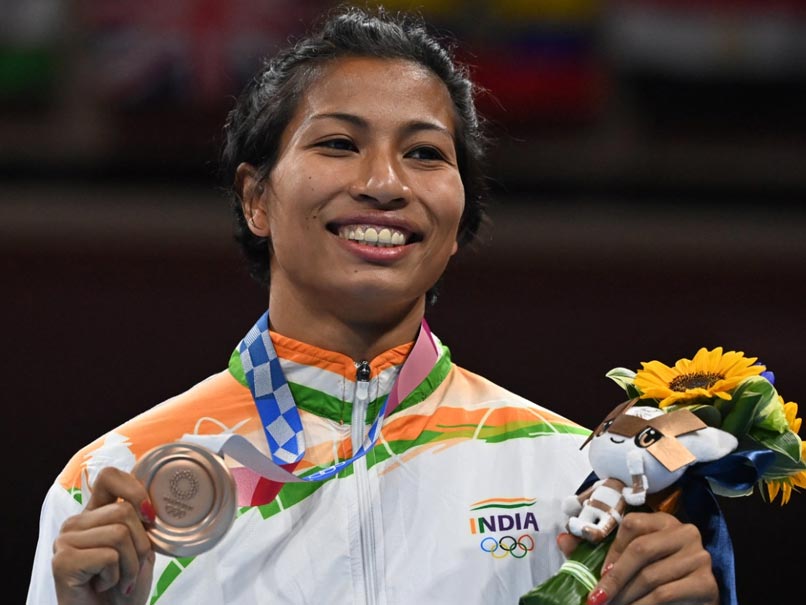 Lovlina Borgohain became the third Indian boxer to win a medal at the Olympic Games.© AFP

She had the time of her life in Tokyo with a medal on Olympic debut being the icing on the cake but Indian boxer Lovlina Borgohain says all of it is "done and dusted now" and she will start afresh in every aspect of her game for the Paris edition in 2024. In an exclusive interview to PTI, Borgohain, who clinched the welterweight (69kg) bronze, spoke about the hardships she endured to get where she is, the joy of watching the triumph of human spirit at the Games and how her regular life now becomes much more eventful thanks to overnight fame.

The 23-year-old from the tiny Baromukhia village of Assam's Golaghat district became only the third Indian boxer to finish on the Olympic podium, joining two of the biggest icons in Indian boxing -- six-time world champion MC Mary Kom and the very decorated Vijender Singh.

She had vowed to touch upon her sacrifices only after her campaign was over and she did exactly that.

"My first sacrifice was to stay away from my home for the past eight years and not being there for my family in times of their problems and watching from a distance. This is the biggest sacrifice," she said.

"Personally, I have sacrificed some desires that youngsters like me would have. For example not eating things that so many others of my age eat (fast food), I wouldn't take leave from training to concentrate on the game. And this continued for eight years," she revealed.

She does plan to take a holiday now that the job is done before getting down to prepare herself for a better medal in Paris in three years from now.

"This Olympics is done and dusted. I will have to start afresh in every aspect, not just one," she said, when asked what changes she would make to her technique after the Tokyo campaign.

Would those changes include additional strength in her punches, which despite being accurate, seemed to be slightly low on power, especially in the semifinal loss to reigning world and now Olympic champion Busenaz Surmeneli of Turkey?

"I was benefitted by the work but for something as big as Olympics, four months is not enough. Uss se kuch nahi hota, you need such work in a four-year cycle," she explained.

Borgohain defeated former world champion Nien-Chin Chen in the quarterfinals to reach the semi-final and with that triumph, she also beat the fear, which she experienced previously before stepping into the ring.

The pent up emotions finally came out in the form of an ear-splitting scream when her hand was raised by the referee.

"For so many years, several emotions were just inside me, I had internalised them. But in this Olympics, when I realised the support that I was getting from the country every time I was stepping in the ring and landing any punch, that scream was an ode to that support and emotion," she explained.

"It was an expression of my own pent up emotions and also an ode to the support that I got," the youngster said. The quarterfinal win was one of the two special memories that, Borgohain said, will remain with her for the rest of her life; the other being the first ever shared gold medal in the Games in which she saw the triumph of human values.

"The best memory is that I finally managed to beat a boxer who had beaten me four time before coming here. To beat her at the Olympics is a special moment of my career.

"Second was the gold medal shared by Qatar and Italy in the high jump. It showed that humanity is alive and sport is the only medium which can connect two different countries like this, two human beings like that," she said.

Italy's Gianmarco Tamberi and Mutaz Barshim of Qatar shared the honours after both cleared the same height of 2.37 meters in men's high jump.

It was Barshim who offered to share the top prize with Tamberi, his good friend, despite officials offering a jump off to decide the winner.

High jump allows sharing of the gold if both athletes agree and Tamberi and Barshim became the first set in over a 100 years to agree to that.

"No matter how hard somebody tries to cause frictions, sports can bring everyone together, I learnt this while watching that moment," Borgohain said.

The youngster, who started out as a kick-boxer, had a rough build-up to the Games, enduring a bout of COVID-19 while battling the anxiety of her mother's kidney transplant last year.

Borgohain couldn't be there when the surgery took place as she was training at the national camp and COVID ensured that she missed a crucial training trip to Italy. Was there ever a moment when she felt it was too much to deal with?

"Difficulties of my life are not a story of last few months, they have been there for eight years. I am sure they will be there even going forward. I have never lost hope and will never do so either.

"I have always felt confident of facing adversity and that will never change," she asserted. Someone who likes to meditate to keep calm, Borgohain also felt that mental health assistance is not needed to battle challenges if one has self-belief.

"If you have faith in yourself, then I don't think you need mental health assistance," she said.

Finally, her life has changed drastically in a matter of days. Despite being a two-time world championship medallist, it is this Olympic bronze that has made Borgohain a household name.

Distinctly aware of the spotlight she will be under, Borgohain said she will learn from the experiences of several other achievers to conduct herself well as a public figure.

"There are a lot of role models in India who have taken the burden of expectations on their shoulders. I would take a cue from how they manage themselves to perform my duties," she said.

"I will not change myself, I would change the colour of my medal. I would always remain a student of boxing," she signed off.

Comments
Topics mentioned in this article
Olympics 2020 India Boxing Lovlina Borgohain Olympics
Get the latest updates on IPL Auction 2023 and check out  IPL 2023 and Live Cricket Score. Like us on Facebook or follow us on Twitter for more sports updates. You can also download the NDTV Cricket app for Android or iOS.