Tokyo Olympics: Britain's Tom Dean came back from two bouts of Covid to claim Olympic gold in the 200m freestyle in Tokyo. 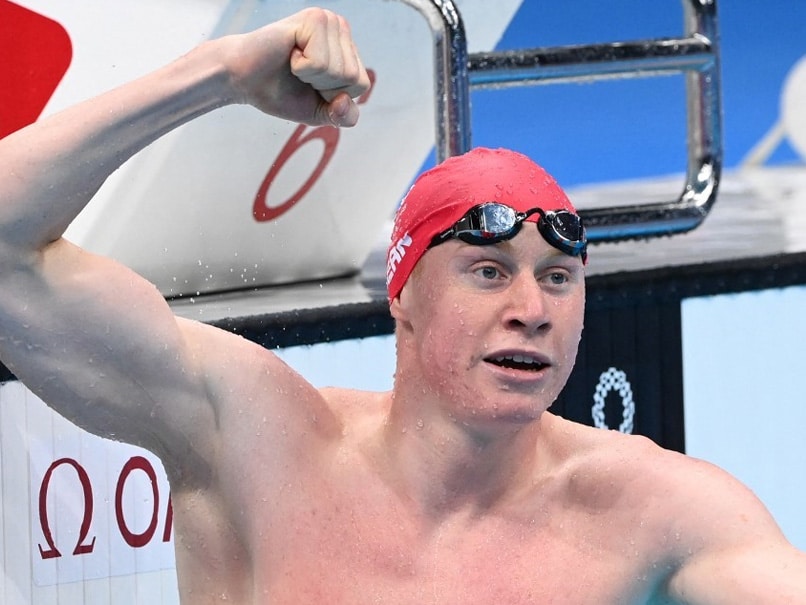 Britain's Tom Dean came back from two bouts of Covid to claim Olympic gold in the pool on Tuesday, edging out team-mate Duncan Scott to win the 200m freestyle in Tokyo. Dean said a gold medal seemed "a million miles away" when he was consigned to isolation in January after contracting the virus for the second time in five months. But the 21-year-old swam the race of his life at the Tokyo Aquatic Centre to lead the first British one-two since 1908, which was also the last time the team won gold in the event.

"It's amazing, a dream come true having a gold around my neck," said Dean.

"I contracted Covid twice in the last 12 months. It's unheard of. When I was sitting in my flat in isolation, an Olympic gold seem a million miles off, but here we are," he added.

Dean, whose 1min 44.22sec broke a British record, also needed time to recover from the illness before he could resume high-intensity training.

"It was tough having a long time out of the water and it obviously requires a slow build-up because of the nature of the disease you can't go straight back into full training. It was tough, it was a very bumpy ride," he said.

Dean came from behind in the final 50m to reel in world junior record holder Hwang Sunwoo of Korea, with Scott taking silver (1:44.26) ahead of Brazil's Fernando Scheffer (1:44.66).

Hwang torched the first 150m in world record pace and Dean, placed next to him in lane six, seemed to benefit as he kept in touch with the Korean, pushed past him, and then resisted a late Scott surge to hold on.

"It's the single greatest achievement of my life," added Dean.

Scott and Dean are roommates in the Olympic village and the pair came into the event ranked number one and two in the world respectively.

The greater expectation though weighed on Scott, the top seed who chalked up the best time in the semi-finals.

"Duncan and I are great mates. He's an absolute class act and I've looked up to him for a long time. To share a podium with him is amazing," said Dean.

Scott, who won two silver medals in relays in Rio, will have another chance of gold in the 200m individual medley, which starts on Wednesday.

"Massive credit to Tom there, that was unbelievable. He's a good mate out of the pool and it's great to be able to compete against him. I'm delighted with that and I'm buzzing for Deano," said Scott.

Comments
Topics mentioned in this article
Olympics 2020 Olympics Swimming
Get the latest updates on ICC T20 Worldcup 2022, check out the Schedule and Live Score. Like us on Facebook or follow us on Twitter for more sports updates. You can also download the NDTV Cricket app for Android or iOS.