Tokyo Olympics: Aditi Ashok produced scintillating performances on all four days of the competition, going toe-to-toe with some of the world's best. 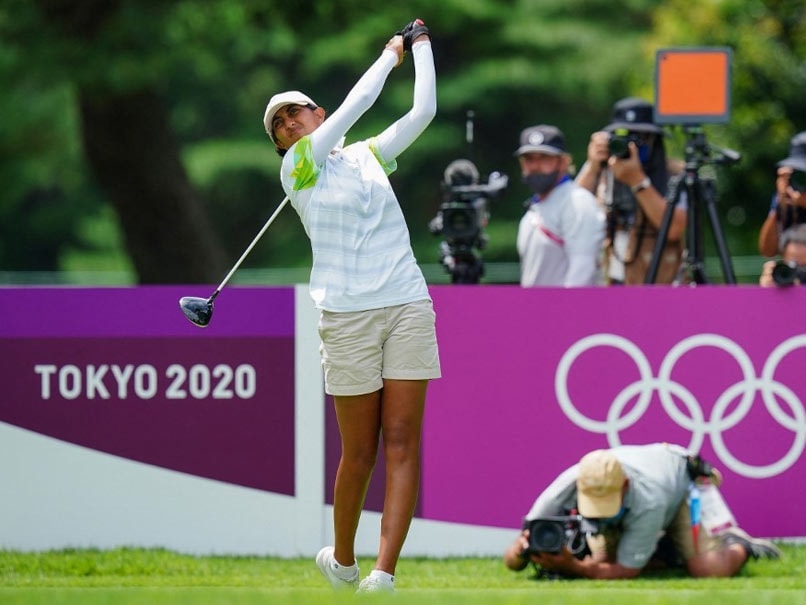 Aditi Ashok finished a brilliant fourth in the women's golf competition at the Tokyo Olympics.© AFP

Aditi Ashok was on the brink of making history but fell just short of winning a medal at the Tokyo Olympics on Saturday. She would have been the first Indian to win an Olympic medal in golf but it wasn't to be for the 23-year-old, finishing a remarkable fourth in Tokyo. She finished just two shots behind gold medal medal winner Nelly Korda of USA and just a shot behind Mone Inami of Japan and New Zealand's Lydia Ko, who win silver and bronze, respectively. Going into the competition, Aditi Ashok, ranked 200 in the world in women's golf, wasn't even in the reckoning for a medal in Tokyo. However, the Indian produced scintillating performances on all four days of the competition, going toe-to-toe with some of the world's best.

Aditi Ashok might have not a won a medal in Tokyo but she definitely won hearts of fans all over the world thanks to her stupendous showing.

Well played @aditigolf! You have shown tremendous skill and resolve during #Tokyo2020. A medal was narrowly missed but you've gone farther than any Indian and blazed a trail. Best wishes for your future endeavours.

Congrats @aditigolf while I know the pain of finishing 4th, what you did the last four days playing against the best in the business is nothing short of spectacular . I am a fan for life .. #RuknaNahiHai #olympics

Aditi Ashok, you missed the Olympic medal by a whisker but you have finished at 4th spot at #Tokyo2020 !
We are proud of your achievement @aditigolf and best wishes for your future journey!#Cheer4India https://t.co/QUaeNVAJRu pic.twitter.com/tBRN3narYI

Aditi Ashok, deserves a standing ovation for her exemplary performance at #Tokyo2020.

You played consistently well, had us holding our breath till the end @aditigolf !

You have taken Indian golfing to new heights by today's historic performance. You have played with immense calm and poise. Congratulations for the impressive display of grit and skills.

This is an Aditi Ashok appreciation tweet #Tokyo2020 @aditigolf pic.twitter.com/5U2a1jt1RR

Making a cricket-crazy country wake up early on a weekend to bite their nails while watching golf.

This is the best ever Indian performance in the Olympics.

Ranked 200 in the world, finish 4th in the biggest event of the sport, #AditiAshok you are a gem #Tokyo2020 pic.twitter.com/9C61GbCjrd

What stood out in Aditi Ashok's performance in Tokyo was her putting skills. Even as the top golfers found the going a little hard on the green, the Indian was simply a putting machine.

She hardly put a foot wrong in all the four rounds, continuing to stay in touch with the leaders when most expected her to fall off.

Ashok put women's golf on the map in India five years ago when, at the age of 18 and fresh out of school, she opened with two 68s at the Rio Olympics to threaten the lead before falling away over the final 36 holes.

The 23-year-old, who had her mother caddying in Tokyo, went into the final round on 12-under 201, sitting pretty in second place.

On Saturday, Aditi once again, showcased her expertise on the green, sinking everything from within 10 feet.

Comments
Topics mentioned in this article
Aditi Ashok Golf Olympics 2020 Olympics
Get the latest updates on ICC T20 Worldcup 2022, check out the Schedule and Live Score. Like us on Facebook or follow us on Twitter for more sports updates. You can also download the NDTV Cricket app for Android or iOS.