Shardul Thakur took two wickets in the last over in addition to two dismissals via run out that put the breaks on the New Zealand's chase and was declared man of the match. 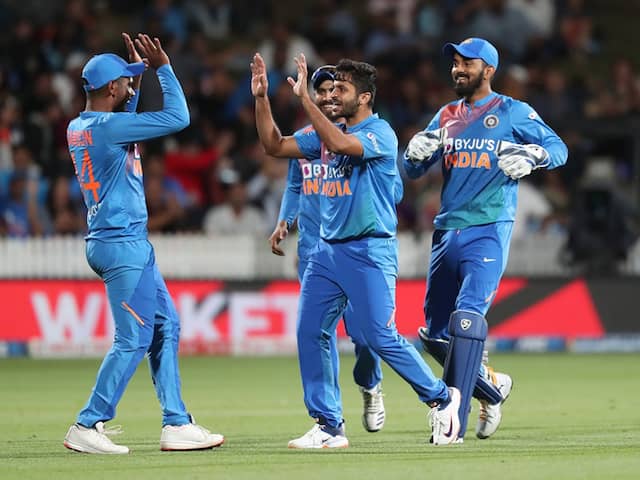 Shardul Thakur ended the match with figures of 4/33.© AFP

India on Friday took a 4-0 lead in their ongoing T20I series against New Zealand with a second consecutive Super Over win in Wellington. New Zealand seemed to be on their way to chasing down the target of 166 but, as was the case in the previous T20I, a last over fumble led to the scores being tied. Shardul Thakur took two wickets in the last over in addition to two runouts that put the breaks on the New Zealand's chase and was declared man of the match. "You couldn't ask for anything more," said Shardul at the post-match presentation ceremony. "This is what we play for, these nail-biting finishes."

With New Zealand needing seven to win off the last over, Shardul knew that a couple of dot balls will do the trick. He ended up dismissing Ross Taylor off the very first ball. Shardul ended the match with figures of 4/33.

"After the last game, we learned that we should never lose hope. If I bowl a dot ball or a wicket ball, the pressure is on them," he said.

Additionally, he also made a valuable contribution with the bat, scoring 20 runs off 15 balls and sharing a 43-run partnership for the seventh wicket -- the highest of the Indian innings.

"It was important to stretch the partnership in the middle, and should have carried on until the 19th and 20th over, so hopefully next time things turn out better for me," he said.

Fast bowler Tim Southee, who was standing in as New Zealand captain in the absence of Kane Williamson, said that the hosts made it tough for themselves by giving India a sniff in the final stages of the game after dominating for most of it.

"It is very tough. To get ourselves the position we got today and then give them a chance... India grabbed it with both hands. When you got a young bowling attack, it's a critical decision (to bowl the Super Over) from a number of people. You make it tough on yourself when you give a sniff to teams like India," he said.

New Zealand Cricket Team Shardul Thakur Cricket New Zealand vs India, 4th T20I New Zealand vs India, 2020
Get the latest Cricket news, check out the India cricket schedule, Cricket live score . Like us on Facebook or follow us on Twitter for more sports updates. You can also download the NDTV Cricket app for Android or iOS.