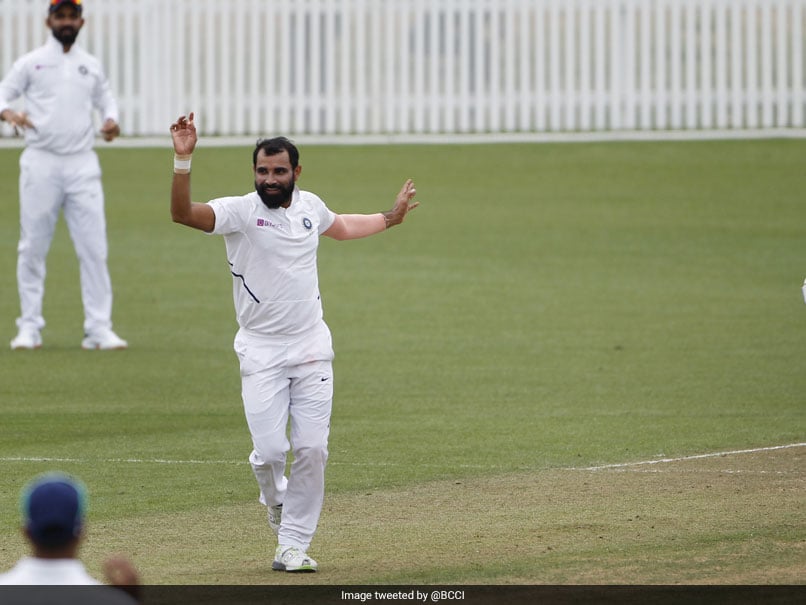 NZ vs IND: Mohammed Shami picked up 3/17 in the first innings of warm-up game.© Twitter

Jasprit Bumrah and Mohammed Shami gave an exhibition of high quality fast bowling on day two of India's warm-up encounter against New Zealand XI, sending a warning signal for the home team ahead of first Test in Wellington. For the record, New Zealand were bowled out for 235 in 74.2 overs but Bumrah (2/18 in 11 overs) and Shami (3/17 in 10 overs) used the conditions well and in the process added miles to their legs ahead of the two World Test Championship games.

Umesh Yadav (2/49 in 13 overs) and Navdeep Saini (2/58 in 15 overs) bowled more overs but weren't half as good as the two premier pacers who troubled the batsmen in all their spells.

With the pitch easing out, Prithvi Shaw (35 batting off 25 balls) unleashed a series of cover drives including a six off a ramp shot while Mayank Agarwal (23 batting off 17 balls) got a maximum with a Nataraja Shot to finish the day at 59 for no loss.

For head coach Ravi Shastri, the basic idea was to check out how his pacers got into the groove and Bumrah and Shami hit the straps straightaway in overcast conditions.

While Umesh and Saini in their first spells bowled too full, Bumrah pitched deliveries on back of length generating disconcerting bounce. He bowled in three short spells while Shami bowled two spells.

The crafty Shami, after getting a hang that ball wasn't jagging around too much despite cloud cover, concentrated on getting the ball to seam both ways.

Bumrah got Will Young (2) with an angular delivery that straightened after pitching to get a nick that landed in Rishabh Pant's gloves.

The delivery that got right-hander Finn Allen (20) was one that pitched on back of length and the batsman played for the bounce, deciding to shoulder arms. However the ball nipped back and clipped the off-bail much to his dismay.

The second spell that Shami bowled post lunch was the one that troubled the New Zealand batsmen including senior international Jimmy Neesham, who was unable to counter the seam movement and extra bounce.

Before that he removed the set Henry Cooper (40 off 68 balls) with a fullish delivery that the batsman wanted to drive.

Once they had bowled enough overs, the duo didn't come out in the final session as they had done their job for the day.

The final half an hour was entertaining as Scott Kuggeliejn and Blair Tickner got some serious pasting from both Shaw and Agarwal, who used the pace to get some easy runs.

It did help that the Seddon Park track had eased out considerably making stroke-play easier than expected.

With India sticking to the Shaw-Agarwal opening combination for the second successive day, Shubman Gill may just have to wait for his Test debut.

Seddon Park, Hamilton New Zealand vs India, 2020 Cricket
Get the latest updates on IPL 2021, check out the IPL 2021 Schedule and Indian Premier League Live Score . Like us on Facebook or follow us on Twitter for more sports updates. You can also download the NDTV Cricket app for Android or iOS.