Neil Wagner has been on paternity leave but is available for the second Test -- as is seamer Matt Henry -- creating a healthy selection problem for New Zealand. 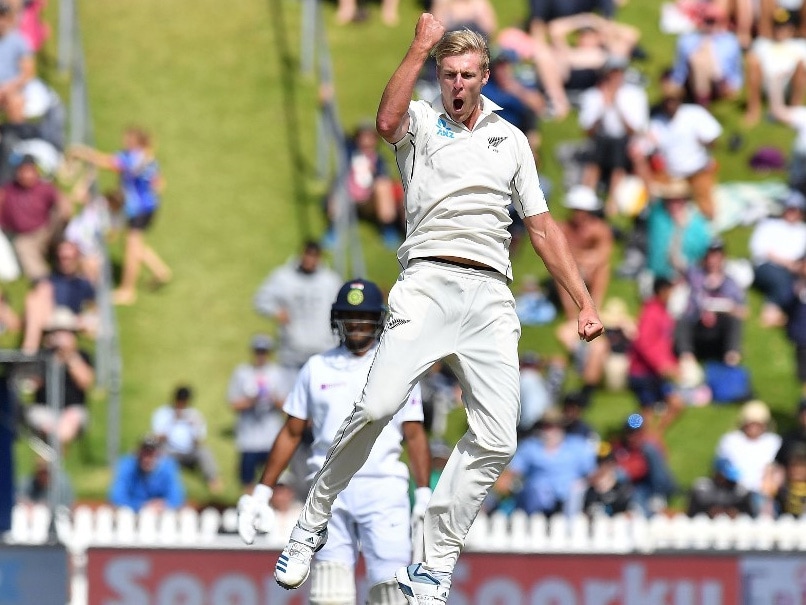 Kyle Jamieson's brilliant debut has given New Zealand a selection conundrum for the 2nd Test.© AFP

The eye-catching debut performance of Kyle Jamieson in the crushing win over India has left New Zealand with a selection conundrum as they look to sweep the two-Test series. The chief destroyer when New Zealand rolled India for 165 in their first innings to set up a 10-wicket win in Wellington on Monday was the 6ft 8in (2.03m) all-rounder Jamieson, filling in for short-ball maestro Neil Wagner. After taking four for 39 and baffling India's batsmen with the bounce extracted by his tall frame, Jamieson further enhanced his reputation with the bat.

He bludgeoned 44 off 45 deliveries, including four sixes, igniting a late scoring flurry where the last three wickets contributed more than a third of New Zealand's first innings 348.

Wagner, who has 204 Test wickets, has been on paternity leave but is available for the second Test starting in Christchurch on Saturday -- as is seamer Matt Henry -- creating a healthy selection problem for New Zealand.

"Kyle was brilliant on his debut," said captain Kane Williamson.

"I think we saw in the white ball format how he is able to contribute in so many different areas, obviously that slightly unique part to his game with his height where he creates quite a different bounce," he added.

Williamson was not giving anything away about the likely balance of the side for the second Test.

"Neil will be pretty excited to get back to the team as well so it's really handy," Williamson continued.

"Obviously we have Matt Henry with us as well and he has been a really good performer for the team."

Still to return to full fitness is New Zealand's one genuine express bowler Lockie Ferguson, who suffered a calf injury during his Test debut against Australia in December

"We had so many fast bowlers with injuries. They're all fit and coming back into the fold and you feel there is that element of depth with fast bowlers that we always thought we had," Williamson said.

Williamson admitted that if New Zealand had been forced to chase 150 or more in their second innings it "would have been really challenging".

Kohli conceded that India would face inevitable criticism for letting New Zealand off the hook.

"We have to understand we were not at our best in this game and there is no shame or no harm in accepting that," he said.

"Playing sport at an international level, wins and losses are part of things. We're not bothered by another loss but we're not going to take a backward step, that's for sure."

Matt Henry New Zealand vs India, 2020 Cricket
Get the latest updates on SA vs IND 2021-22, check out the Schedule and Live Score . Like us on Facebook or follow us on Twitter for more sports updates. You can also download the NDTV Cricket app for Android or iOS.