Ishant Sharma joined the Indian team in New Zealand 72 hours before the first Test and bowled nearly 23 overs for a five-wicket haul. 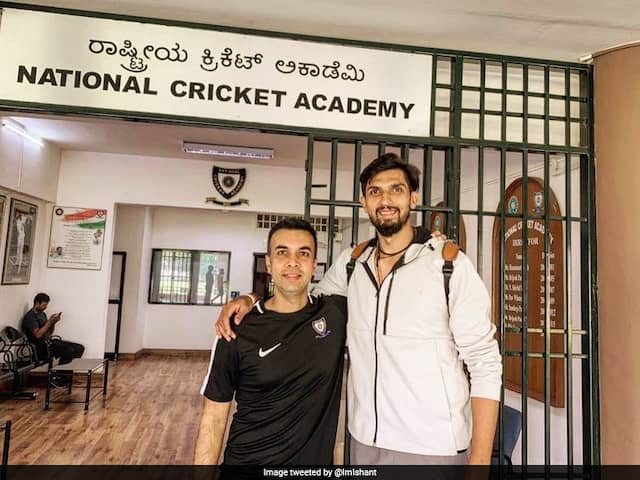 Ishant Sharma had praised the NCA's role in his rehabilitation.© Twitter

The resurfacing of Ishant Sharma's ankle injury has left the BCCI red-faced and National Cricket Academy (NCA) head physio Ashish Kaushik under the scanner. The 31-year-old speedster could miss the first part of the IPL in case he is required to undergo rehabilitation at the much-maligned NCA. Ishant joined the Indian team in New Zealand 72 hours before the first Test and bowled nearly 23 overs for a five-wicket haul. The Indian team management has remained tight-lipped about the outcome of his scan results but according to sources in the BCCI, the same ligament injury on his right ankle has flared up once again.

The BCCI media team issued a release after 24 hours which didn't state anything other than what the covering media in Christchurch already knew. A few questions have popped up in the BCCI circle with this latest injury fiasco.

"Once Ishant was ruled out for six weeks by the Delhi team physio after his scan reports revealed Grade 3, how did Kaushik and the NCA team come to conclusion that three weeks is good enough for return to competitive cricket?," a BCCI insider questioned.

The second question is: was there a greater push from the player himself to get fit in time for the Test series?

The third and the most important point is: how thorough was the rehabilitation given that the team's most senior pacer didn't play a single competitive match, which is the norm for any player coming back into the national fold from an injury?

Ishant had informed the media in Christchurch that he bowled 21 overs at the NCA in two days, after which he was given the clearance. He, in fact, tweeted a picture of his with Kaushik, praising the NCA's role in his rehabilitation.

Many in the BCCI took this as a positive publicity after some prominent India players, coming back from injury-induced breaks, opted for personal rehabilitation programme with their IPL franchises over the NCA.

Recently, BCCI president Sourav Ganguly had said that the NCA will be a one-point centre for all contracted players.

Ishant Sharma New Zealand vs India, 2nd Test
Get the latest Cricket news, check out the India cricket schedule, Cricket live score . Like us on Facebook or follow us on Twitter for more sports updates. You can also download the NDTV Cricket app for Android or iOS.