Ajinkya Rahane is hopeful that a turnaround will happen on a green top at the Hagley Oval, which he reckons will be better for batting compared to the one they got in Wellington. 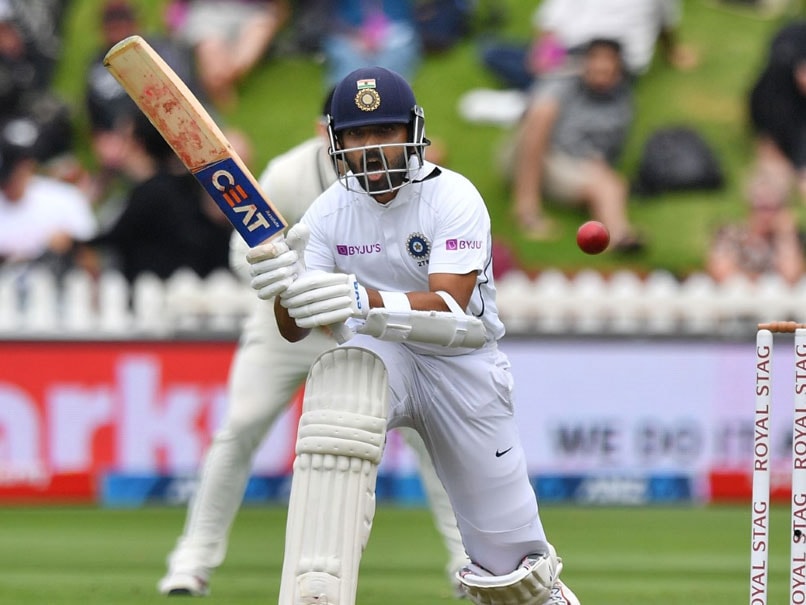 Ajinkya Rahane top-scored with 46 in the first innings of the opening Test.© AFP

Ajinkya Rahane wants to take on the New Zealand pace battery with more intent in the second Test and his foolproof strategy includes countering the awkward angles which became a nightmare for Indian batsmen during the first Test at the Basin Reserve. Rahane, who top-scored with 46 in the first innings of the opening Test, is hopeful that a turnaround will happen on a green top at the Hagley Oval, which he reckons will be better for batting compared to the one they got in Wellington.

"I am not saying (we have to be) more aggressive but having that intent and clear mindset will help us," Rahane told reporters on Thursday.

New Zealand pacers Trent Boult, Tim Southee and Kyle Jamieson used the short ball liberally after coming wide of the crease with an angle that was disconcerting for the batsmen.

"I think they used that angle really well in Wellington. Bowling wide of the crease or from the centre, they changed angles while bowling the short balls. I think their plan was completely clear.

"As a batsman, if you going to think about a particular shot, then you need to back yourself and play that shot. You cannot doubt yourself. We need to forget what happened in Wellington," the Indian vice-captain said.

According to Rahane, the two net sessions at the Hagley Oval is being used to practice negating the awkward angles that Neil Wagner and company can create.

"That's what I said: try and learn what mistakes we did as a group, what can we learn. I think we have to practice those angles. We had a practice session and we have one more tomorrow. And you have to practice that and trust your ability in the middle," Rahane said in a reassuring tone.

While net sessions are important, it's the instincts in match situations that counts, he said.

"But to change or adjust those angles there are times you need to be instinctive while you are batting. It can mean standing on off-stump, or standing outside the crease or staying deep inside the crease - like if it is a pitch for cut shot then you can stand deeper in the crease. This is the mental side of the game," Rahane said.

"For me, as a batsman it is important you show your intent to the bowler, if you stand in one spot then the bowler doesn't need to change anything. These are small things we have been working on in practice and how to use the crease and the angles. Doesn't matter how much you practice you must trust or have the belief to be able to do it in the middle," he added.

Cheteshwar Pujara has drawn a lot of flak for his dour approach in the first Test where his painstaking 11 off 81 balls put enormous pressure on the other batsmen.

Each batsman is different and everyone will have their counter mechanism style, he explained.

"You have to come back stronger and play accordingly. If you can trust your ability at the centre and counter attack and everyone's game is different. I play completely different game than Virat and Pujara. As a team we need to figure it out how we are going to play in the middle, communication will be the key," he said.

While the 22-yard strip at the Hagley Oval can't be separated from the outfield due its lush green cover, Rahane said according to Hanuma Vihari there will be good pace and bounce on this wicket.

"I generally don't see the wicket before the game. But see whatever we expected, we got in Wellington, we expect the same here. The India A guys played here and Hanuma (Vihari) was telling us that the wicket was much better.

"There is good pace and bounce on this wicket. We will have to see and assess the conditions very quickly on the first day of the game and play accordingly."

Ajinkya Rahane New Zealand vs India, 2020 Cricket New Zealand vs India, 2nd Test
Get the latest updates on ICC Women's Cricket World Cup 2022 and IPL 2022, check out the Schedule , Live Score and IPL Points Table. Like us on Facebook or follow us on Twitter for more sports updates. You can also download the NDTV Cricket app for Android or iOS.