U Mumba were in cruise control mode for the last 10 minutes of the match and emerged comfortable winners. 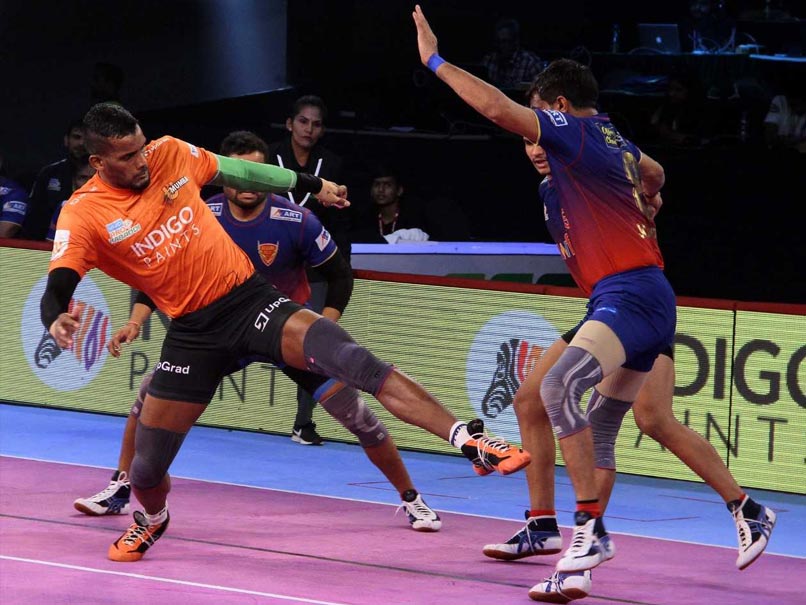 An all-round performance from U Mumba helped them register a comfortable 39-23 win over Dabang Delhi in a Pro Kabaddi League (PKL) season 6 match on Saturday. Siddharth Desai and Rohit Baliyan combined to score 17 raid points whereas Fazel Atrachali and Surender chipped in with 8 tackle points to lead U Mumba to a win. In the other match of the night, Bengaluru Bulls ran riot, beating Tamil Thalaivas 36-22. For Bengaluru, Rohit Kumar earned 10 raid point and Mahender Singh got four tackle points. Ajay Thakur was the top raider for Tamil Thalaivas with six raid points.

Earlier in the first match of the day, Chandran Ranjit was the lone performer for Dabang Delhi as he ended up with seven raid points while Naveen Kumar scored four points. U Mumba are now back on the top of the table in Zone A with 62 points from 16 matches while Dabang Delhi are fourth in the table with 33 points from 12 matches.

U Mumba sent Meraj Sheykh to the bench in the 2nd minute to lead 2-1. Naveen started off brightly for Dabang Delhi as he got a couple of raid points. It was 3-3 after three minutes with both teams keen to snatch an early lead.

U Mumba got ahead with a couple of raids and tackle points to lead 8-5 after 11 minutes. Siddharth got into the act and hit a couple of successful raids which led to an all-out being inflicted on Dabang Delhi.

U Mumba led 14-6 after the all out and Dabang Delhi were staring at falling behind even further.

At the end of the first half, U Mumba led 15-8 and were looking on course to a comfortable win.

U Mumba started the second half by inflicting another all out in the 24th minute to lead 23-9. Dabang Delhi were looking short of ideas as both
their raiders and defenders were struggling.

Chandran Ranjit got a raid point as Dabang Delhi hit double figures. The Delhi defence sent back Siddharth to the bench and scored their second tackle point to trail 11-24.

But with Siddharth looking in fine form and U Mumba's defence working in tandem there was no way for a comeback for Delhi.

U Mumba were in cruise control mode for the last 10 minutes of the match and emerged comfortable winners.