SRH vs DC, IPL 2021: "I Told Rishabh Pant That I Too Can Bowl The Super Over," Reveals Axar Patel

SRH vs DC, IPL 2021: Left arm-spinner Axar Patel revealed how he volunteered to bowl the Super Over against SunRisers Hyderabad through his talks with skipper Rishabh Pant. 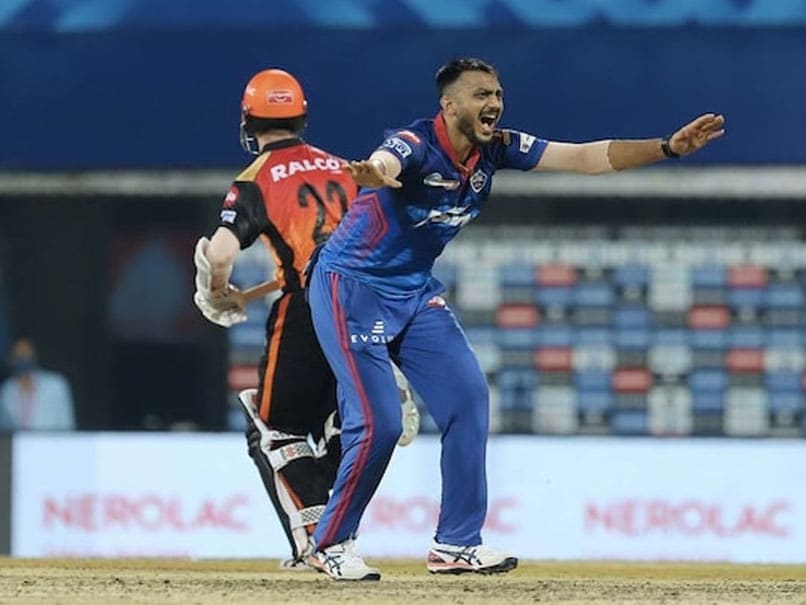 SRH vs DC: Axar Patel gave away only seven runs in the Super over versus SRH.© BCCI/IPL

Delhi Capitals (DC)'s left-arm spinner Axar Patel said that he had volunteered to bowl the high-octane Super Over in their Indian Premier League (IPL) win over Sunrisers Hyderabad (SRH) in Chennai, which was his first game since recovering from COVID-19. After being surprisingly handed the ball for the crucial over, Axar conceded only seven runs against the marauding duo of David Warner and Kane Williamson and the paved the way for DC's win on Sunday night. "When I was in the dressing room, I knew that the pitch would assist spinners," Axar said of the challenging Chepauk track. "When we went down, there were a lot of discussions. We thought initially that we could go with a pacer since they will be sending a left-right combination," he added.

"After that, just when we were going to the ground, I thought, even a spinner could be effective. So I told Rishabh 'Even I can bowl, think about it'. So he spoke to (coach) Ricky (Ponting) and it was decided at the last moment that I will bowl," Axar said.

The move paid off handsomely as Axar used his variations to deadly effect. Axar, who joined the DC camp only three days prior to their match against SRH after recovering from COVID-19, also bowled beautifully in the regulation match and returned excellent figures of 2/26 in his quota of four overs.

A few sessions with the team and he was raring to go. "I was ready from my end... The team management asked me how I am feeling after (recovering from) COVID. You know your body better. I had done four sessions already," he said.

"On Chennai's wicket, the ball has been coming slow and turning. I told the management that I'm match fit, so they told me that if I'm ready I will play straight away," the left-arm spinner added.

He thanked his teammates and said they trusted him more than the spinner himself. "I was nervous before the game, but once I did some warm-up sessions with the team, I was fine," Axar said.

"I was emotional to be amongst my close friends and teammates again since I was back in action after being in quarantine for 20 days, but everyone backed me to do well, and they trusted me even more than I trusted myself," he added.

The fact that Axar was coming off a terrific outing in his debut Test series against England must have added to his confidence heading into the lucrative league.

"I was bowling well even before COVID -- in the Tests as well as the T20s... I was carrying that confidence. I wasn't thinking too much about COVID... obviously, it was a frustrating phase," he said.

The spin bowling all-rounder expressed that the Delhi Capitals, who defeated Mumbai Indians in their last match, couldn't have asked for a better outing in Chennai.

"We won two out of two matches in Chennai, so we couldn't have put in a better performance at this venue. And when a close match falls in the team's favour, then the team's confidence gets a major boost," he said.

"We haven't discussed about our plans for the Ahmedabad leg yet. We are taking one match at a time and staying in the present as much as possible," Axar concluded.

Rishabh Pant IPL 2021 Cricket Sunrisers Hyderabad vs Delhi Capitals, Match 20
Get the latest updates on IPL Auction 2023 and check out  IPL 2023 and Live Cricket Score. Like us on Facebook or follow us on Twitter for more sports updates. You can also download the NDTV Cricket app for Android or iOS.