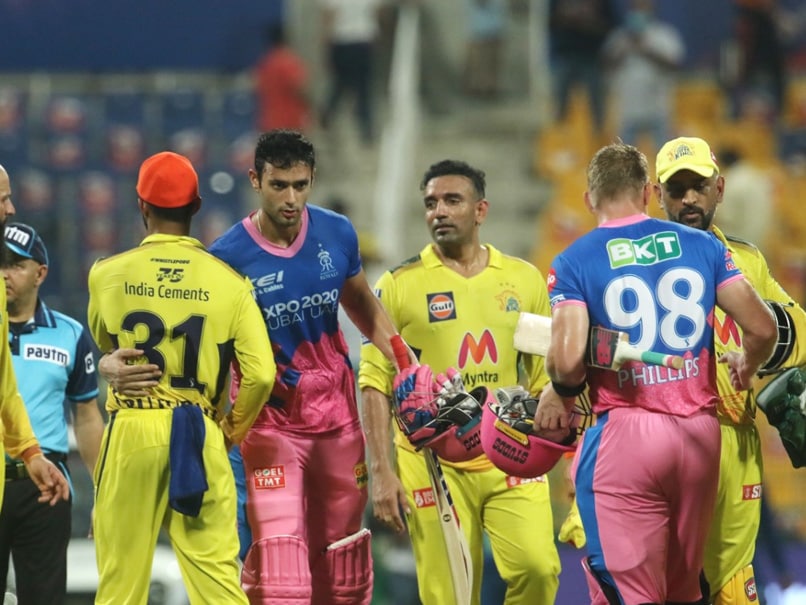 Yashasvi Jaiswal timed it beautifully while Shivam Dube deflated Chennai Super Kings with brute power as Rajasthan Royals kept their play-off hopes alive with a morale-boosting seven-wicket victory in the IPL in Abu Dhabi on Saturday. Jasiwal smashed 50 off 21 balls which included some delectable sixes off star Australian pacer Josh Hazlewood while Dube sent the likes of Moeen Ali and Ravindra Jadeja into orbit en route his unbeaten 64 off 42 balls as Royals made a short work of a victory target of 190 in just 17.3 overs. Royals now have 10 points with two matches to go.

The fourth place is set to be clinched at 14 points and net run-rate is going to be crucial. The defeat won't hurt CSK much as they sit pretty on 18 points, having already made it to last four stage.

When CSK ended their innings at 189 for 4 with Ruturaj Gaikwad's superb 60-ball-101 not out, little did anyone think that Royals' Indian players would reply in kind and go even one better.

Jaiswal, with six fours and three sixes, was given fine support by Evin Lewis (27 off 12 balls) in their opening stand of 77 in 5.2 overs which set up the game.

Hazlewood (0/54) wouldn't have imagined that he would be hit for three sixes in his first spell as the match slipped out of CSK's grasp in the Powerpay itself.

Jaiswal, whose game has improved from last season by a few notches, was seen flicking Hazlewood over deep mid-wicket and also hit a straight six during that knock.

Dube, who doesn't have much of a footwork, hit some monstrous sixes off Jadeja, Moeen Ali and Sam Curran whenever the ball was pitched in his arc. In all, he hit four fours and four sixes.

Such was Dube's domination that even the stylish Sanju Samson (28 off 24 balls) paled in comparison during their 89 run stand for the third wicket in 9.3 overs.

But when the match started, it seemed as if Gaikwad owned the stage as he hit a six off Mustafizur Rahaman's last ball to complete a coveted maiden IPL ton.

Gaikwad struck as many as nine fours and five sixes in his 60-ball 101 not out to make a mockery of Royals' bowling attack in their 12th round encounter.

Some of his shots in the off-side region would be remembered for times to come. Ravindra Jadeja (32 not out off 15 balls) scythed through the Royals attack at the back-end as CSK added 55 runs in only 3.4 overs.

In fact, in the final over, Jadeja faced four deliveries, leaving Gaikwad with two deliveries and he pulled Mustafizur Rahman off the final delivery to complete the coveted landmark.

For the Royals, leg-spinner Rahul Tewatia (3/39 in 4 overs) was the most successful bowler but his joy of getting three scalps was spoilt by Gaikwad with two back-to-back sixes -- one over long-off and other into the sightscreen.

The sixes over mid-wicket off left-arm seamers Akash Singh and Mustafizur were delightful as it landed at least 20 yards behind the ropes into the grass banks.

The Punekar is not someone who is muscular but a "strong core" (according to him) and stable base allows him to maintain shape while going for the big shots as Royals found out on the day.

The manner in which he came down the track and lofted seamer Chetan Sakariya for an inside-out one-bounce boundary made it look as if he was tackling a spinner with enough time at his disposal.

There were a lot of boundaries in the arc between cover and mid-off region as his driving was majestic. Gaikwad's sequence of scores since resumption of IPL is 88, 38, 30, 45 and now 101 not out.

There hasn't been a single failure so far and his partnerships with Faf du Plessis (25) has been the cornerstone of CSK's good batting performance.

That none of their retired stars like Suresh Raina, skipper Mahendra Singh Dhoni and Ambati Rayudu, all IPL heavyweights in their own rights, haven't had much contribution with the bat, isn't affecting them primarily because of du Plessis and Gaikwad's power-packed starts.

On Saturday, they added 47 for the first wicket while they had conjured up 71 against RCB, 74 against KKR and 75 against SunRisers Hyderabad.

Chennai Super Kings Ruturaj Gaikwad Yashasvi Jaiswal Shivam Dube Cricket
Get the latest updates on ICC Women's Cricket World Cup 2022 and IPL 2022, check out the Schedule , Live Score and IPL Points Table. Like us on Facebook or follow us on Twitter for more sports updates. You can also download the NDTV Cricket app for Android or iOS.