IPL 2021: Happy with the win, Punjab Kings co-owner Preity Zinta said that it even with a new name and a new jersey, her team "won't stop us heart attacks in a game". 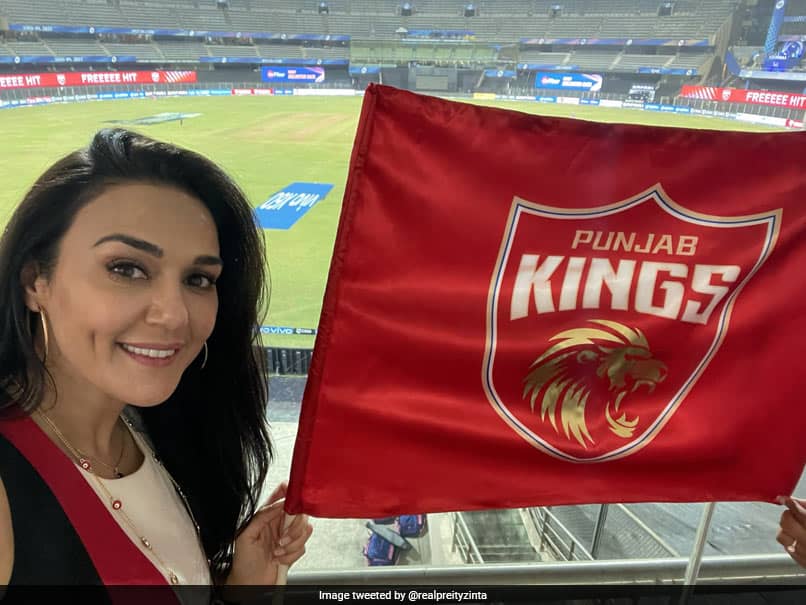 Punjab Kings held their nerves in a run-fest in Mumbai as they squeezed a win against Rajasthan Royals in an Indian Premier League (IPL) 2021 match on Monday. Sanju Samson kept Rajasthan Royals in the game with a scintillating knock but he got out on the final ball of the match, giving Punjab Kings a four-run win. After beginning their season with a win, Punjab Kings' co-owner Preity Zinta took to Twitter to speak about the contest, saying that despite a new name and a new jersey for this season, her team won't stop giving fans heart attacks.

"Yeah What a game ! We have a New name & a New Jersey, still #saddapunjab won't stop giving us heart attacks in a game.  What to do ? Not a perfect game for us but in the end it was PERFECT Wow @klrahul11 @iamdeepakhooda & all the boys @PunjabKingsIPL #RRvsPBKS #IPL2021 #Ting," Preity Zinta tweeted.

"A special mention to #Samson for an incredible knock !  So happy to start this tournament with a Win Folded hands  Yeahh ! #PBKS," she wrote.

A special mention to #Samson for an incredible knock ! So happy to start this tournament with a Win Yeahh ! #PBKS

In the match, after being put into bat, Punjab Kings posted a mammoth total of 221 for six in their allotted 20 overs thanks to half-centuries from KL Rahul and Deepak Hooda.

KL Rahul missed his century by just nine runs, while Hooda played a whirlwind knock of 64 off just 28 balls.

Rajasthan Royals debutant Chetan Sakariya was the pick of the bowlers, returning with figures of three for 31.

In reply, Rajasthan lost wickets at regular intervals but Samson kept peppering the boundary to keep RR in the contest.

With 13 needed in the last over, Samson farmed the strike and took it upon himself to finish the game but couldn't get his side over the line.

KL Rahul Deepak Hooda IPL 2021 Rajasthan Royals vs Punjab Kings, Match 4 Cricket
Get the latest updates on IPL 2021, IPL Points Table , IPL Schedule 2021 , live score . Like us on Facebook or follow us on Twitter for more sports updates. You can also download the NDTV Cricket app for Android or iOS.