IPL 2021: KS Bharat hit the winning six as Royal Challengers Bangalore sealed a win against Delhi Capitals in the final over on Friday. 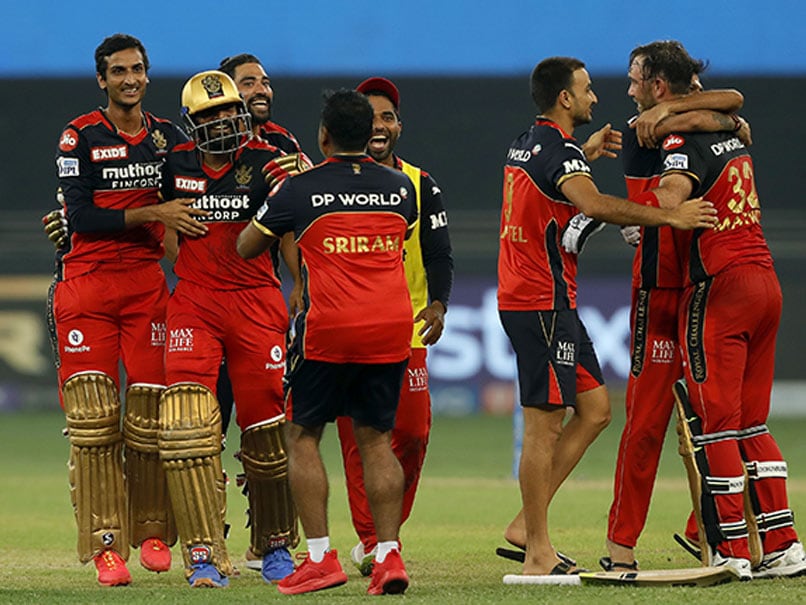 A last-ball six by KS Bharat powered Royal Challengers Bangalore to a seven-wicket win over Delhi Capitals in a thrilling finish to their last match of their league game of the Indian Premier League (IPL) 2021. Bharat smashed an unbeaten 78 off 52 balls while Glenn Maxwell blazed away to 51 in 33 deliveries as RCB chased down a target of 165 with the former's heroics. Needing 15 to win from the final over, Maxwell started it with a boundary but pacer Avesh Khan came back with a couple of excellent deliveries, including a yorker. However, Bharat had the last laugh as he smoked Khan's full toss over long-on for a six to seal the game in his team's favour. A wide off the fifth delivery from Khan helped RCB's cause.

Pacer Anrich Nortje had bowled a brilliant penultimate over, conceding just four runs even as Bharat and Maxwell were on the lookout for runs with 19 needed off the last two overs. The match-winning 111-run fourth-wicket partnership between Bharat and Maxwell gave RCB a rather unexpected win over Delhi Capitals, who finished on top of the league standings despite the loss in the final game.

Avesh, who bowled superbly save for the final over, finished with 0 for 31 in 4 overs while Nortje was brilliant, ending up with figures of 2/24 in 4 overs.

Axar Patel bowled his four overs for 39 runs with 1 wicket while ace off-spinner R Ashwin just bowled one over for 11 runs. Pacer Kagiso Rabada went wicket-less in his 4 overs. The Virat Kohli-led RCB will finish third in the standings with 18 points and take on Kolkata Knight Riders (fourth place) in the Eliminator on Monday.

Wicketkeeper Bharat, who has been pushed up and down the order by the RCB think-tank, underlined his value with this knock, often displaying his big-hitting abilities too. A maiden IPL half-century for Bharat ahead of the play-offs would probably be a good sign for the Bangalore team which has tried several batters at the crucial No.3 spot. His partnership with Maxwell, who lived a charmed life as he survived a few dropped catches, kept RCB in the hunt in the face of a soaring required run-rate. The flamboyant Aussie was not afraid to go for his shots and found the boundary at will.

The chase began rather poorly for RCB as Devdutt Padikkal's attempted ramp shot landed safely in the hands of Ashwin in the deep off the first ball he faced from Nortje. Kohli did not stay for too long, falling for only 4. He became Nortje's second scalp, skying a catch to Kagiso Rabada while attempting a big hit on the leg side. AB de Villiers (26) threatened briefly, hitting two fours and a huge six off Ashwin, before pulling Axar Patel straight to Shreyas Iyer in the deep.

Earlier, RCB rallied to stop Delhi Capitals at 164 for five thanks to a spirited effort from the bowlers, especially Mohammed Siraj (2 for 25 in four overs).

The table-toppers frittered away a strong 88-run opening partnership provided by Shikhar Dhawan (43) and Prithvi Shaw (48) with the other batsmen unable to build on it.

Shimron Hetmyer (29) hit two big sixes to go with two boundaries and ensured the Capitals go past the 150-mark after the batters appeared to struggle in the middle overs.

For RCB, Siraj bowled well to finish with 2 for 25 from his four overs while Harshal Patel, Yuzvendra Chahal and Dan Christian picked up a wicket each. Dhawan and Shaw got the Capitals off to a good start, adding 55 runs in the first six overs, without taking too many risks.

While the left-handed Dhawan, who has been in good form, continued to play fluently, his opening partner came up with some fine shots too.

After winning the toss and opting to field, RCB skipper Kohli chose to open the bowling with the off-spin of Maxwell, who started with a wide.

Dhawan showed his intent with a superb drive on the off-side to get DC moving. The left-right combination of Dhawan and Shaw scored 88 runs in the first 10 overs, hitting some splendid shots on the way before the former fell to Harshal Patel when he gave a catch to Christian. Shaw, who was beginning to look dangerous and slog swept Chahal powerfully for a six over mid-wicket, fell to a catch by Garton in the deep, two short of a well-deserved fifty.

Christian struck a huge blow for the Bangalore team by getting the DC captain Rishabh Pant (10) to edge one to the 'keeper Bharat, leaving them at 108 for three in the 13th over before Hetmyer's efforts got them to a 160-plus total.

Delhi Capitals Srikar Bharat IPL 2021 Royal Challengers Bangalore vs Delhi Capitals, Match 56 Cricket
Get the latest updates on Fifa Worldcup 2022 and check out  Fifa World Cup Schedule, Stats and Live Cricket Score. Like us on Facebook or follow us on Twitter for more sports updates. You can also download the NDTV Cricket app for Android or iOS.