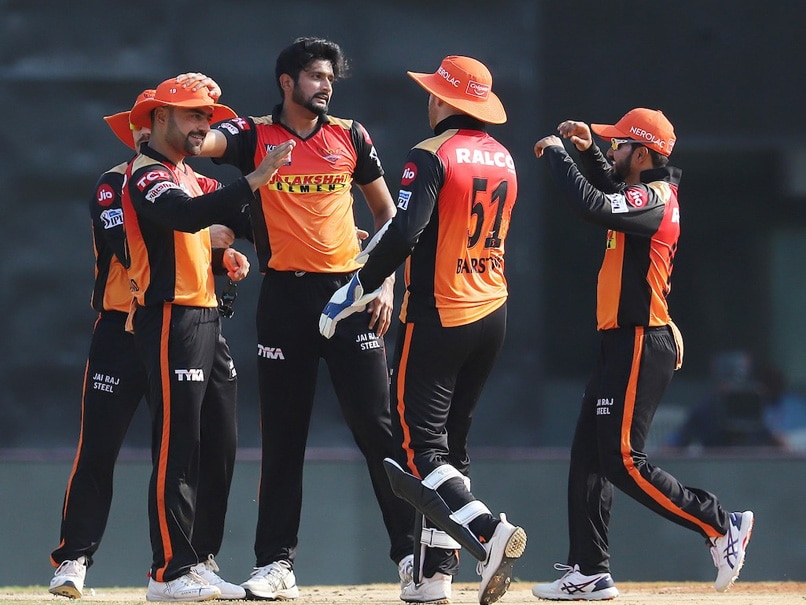 Fast bowler Khaleel Ahmed led an impressive bowling effort before Jonny Bairstow smashed an unbeaten fifty as Sunrisers Hyderabad snapped their three-match losing streak with a convincing nine-wicket win over Punjab Kings in an IPL game, on Wednesday. Asked to bowl first, Sunrisers Hyderabad's pace-spin duo of Khaleel (3/21) and Abhishek Sharma (2/24) did bulk of the damage to bundle out Punjab Kings for a below-par 120 in 19.4 overs. Senior pacer Bhuvneshwar Kumar (1/16), star Afghanistan spinner Rashid Khan (1/17) and Siddarth Kaul (1/27) also picked up a wicket each as Punjab never gained momentum.

Chasing the total, SRH openers Jonny Bairstow (63) and David Warner (37) pummelled Punjab into submission, adding 73 runs off 60 balls to set the foundation. Bairstow and Kane Williamson (16) then knocked off the remaining runs as SRH romped home with 8 balls to spare.

Bairstow and Warner smashed five boundaries and two sixes during their 50-run stand in the powerplay, while Punjab had managed nine fours and two maximums in their entire innings.

Warner picked up the first boundary when he sent Mohammed Shami across point in the third ball of the innings. Bairstow then welcomed Fabian Allen with a four and a six in the next over. A low full toss by Shami was then sent across the mid-wicket by Bairstow before Warner hit the Indian through backward point.

Bairstow also pulled Moises Henriques over long leg, while Warner swatted Arshdeep Singh over the backward square leg. Warner sent Deepak Hooda sailing over extra cover for a six but in the next over he holed out to Mayank off Allen, who bowled a wicket maiden, as SRH were 73 for 1.

Bairstow found an able ally in Williamson, who was playing his first match of the season, as they added an unbeaten 48 runs to help SRH log their first win of the season.

Earlier, Shahrukh Khan (22) and Mayank Agarwal (22) were the top scorers for Punjab Kings, who came into the match after two losses. In an innings when clearing the boundary seemed to be a tall task, Khan managed two sixes, while Agarwal, who was dropped on 0 in the very first over by Rashid, hit two fours.

Opting to bat in their first game at MA Chidambaram Stadium, Punjab lost their in-form skipper KL Rahul (4) early on. Agarwal and Chris Galye (15) stitched 24-run partnership. However, at the end of the seventh over, Khaleel got rid of the Indian with Rashid making no mistakes this time at midwicket.

West Indian Nicholas Pooran (0) was out for a diamond duck as Sunrisers skipper David Warner effected his run out in the eighth over. Gayle followed his compatriot in the next over as he was adjudged leg before.

Punjab was reeling at 53 for 4 at the halfway mark as wickets continued to tumble at regular intervals. Deepak Hooda (13) and Australian all-rounder Moises Henriques (14) got starts but were unable to capitalised on them.

Spin all-rounder Fabian Allen (6) also struggled on his debut. Local star Khan tried to inject some hope into the Punjab camp but a slower ball by Khaleel ended his cameo.

Murugan Ashwin (9) hit a boundary but Kaul accounted for the spinner in the last over which was followed by the dismissal of Shami (3), who was run out.

KL Rahul IPL 2021 Punjab Kings vs Sunrisers Hyderabad, Match 14 Cricket
Get the latest updates on Fifa Worldcup 2022 and check out  Fifa World Cup Schedule, Stats and Live Cricket Score. Like us on Facebook or follow us on Twitter for more sports updates. You can also download the NDTV Cricket app for Android or iOS.