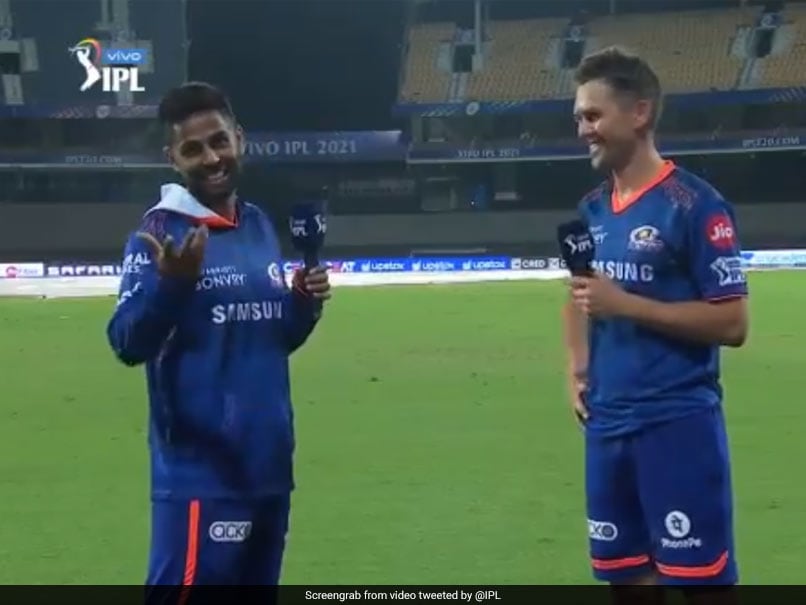 Mumbai Indians pulled off an improbable win over Kolkata Knight Riders on Tuesday night, their first victory of IPL 2021. KKR seemed to be coasting in their chase of Mumbai's 152, but it all went downhill quickly with MI eking out a 10-run win at the MA Chidambaram Stadium in Chennai. There were many star performers on the day for Mumbai Indians among them -- Suryakumar Yadav and Trent Boult. After the match, the duo decided to have a fun chat in front of the camera with Suryakumar even testing Boult's 'Hindi'.

Watch how he fared:

This @trent_boult-@surya_14kumar interview by @28anand has it all.

Suryakumar Yadav was the standout for Mumbai Indians with the bat. The stylish right-hander scored 56 off just 36 balls, including a monster six off Pat Cummins.

Captain Rohit Sharma was the only other MI batsman to score more than 15 runs, dismissed for a 32-ball 43.

In the context of the game, Suryakumar and Rohit's knocks proved crucial to MI's cause as the team only managed to score 38 runs in the last 5 overs, losing seven wickets in the process.

Despite losing Rahul Tripathi and Eoin Morgan cheaply, KKR still were favourites, needing 31 off the last five overs. However, panic seemed to set in after as Rana and Shakib fell on the same score.

At the death, Andre Russell and Dinesh Karthik just couldn't get going. Karthik remained unbeaten on 8 off 11 balls while Russell was dismissed in the last over by Boult after huffing and puffing his way to 9 off 15 balls.

KKR will be kicking themselves after losing the match from a winning position while MI, despite winning their first game of the season, have some tinkering to do in regards to their batting.

Trent Boult IPL 2021 Kolkata Knight Riders vs Mumbai Indians, Match 5 Cricket
Get the latest updates on SA vs IND 2021-22, check out the Schedule and Live Score . Like us on Facebook or follow us on Twitter for more sports updates. You can also download the NDTV Cricket app for Android or iOS.