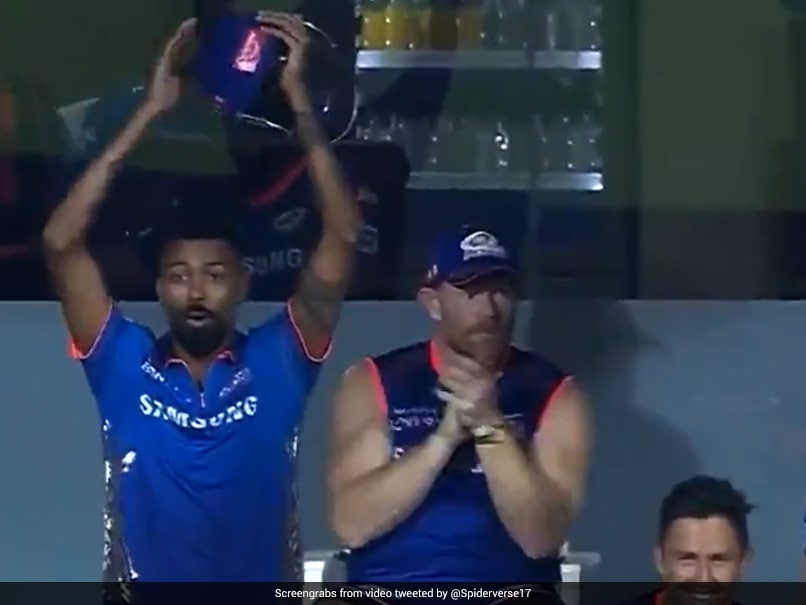 Hardik Pandya reacted to Suryakumar Yadav's enormous six that he hit to brought up his fifty.© Twitter

Mumbai Indians' Suryakumar Yadav slammed a half-century against Kolkata Knight Riders in the ongoing Indian Premier League (IPL) match at the MA Chidambaram stadium in Chennai on Tuesday. Suryakumar Yadav hit a couple of sixes and seven boundaries en route to his 13th half-century in IPL. In the 10th over, Suryakumar flicked one off his pads off Pat Cummins and the ball went sailing out of the ground. As the ball cleared the stadium, Hardik Pandya looked completely shell-shocked in the dugout.

Apart from Suryakumar Yadav (56) only Rohit Sharma (43) got going as Mumbai Indians suffered another batting collapse.

Andre Russell was the pick of the bowlers for KKR as he picked up his maiden five-wicket haul in the IPL.

Chasing a target of 153 runs, KKR got off to a solid start as Shubman Gill and Nitish Rana put on a 72-run stand for the opening wicket.

Gill departed for 33 but Rana kept going and scored his second consecutive half-century in the ongoing IPL 2021.

KKR kept losing wickets at regular intervals and once Nitish Rana was stumped off Rahul Chahar, the batsmen coming in failed to get going and they eventually lost the match by 10 runs.

Hardik Pandya IPL 2021 Cricket Kolkata Knight Riders vs Mumbai Indians, Match 5
Get the latest updates on India vs South Africa and check out  Schedule, Results and Live Score. Like us on Facebook or follow us on Twitter for more sports updates. You can also download the NDTV Cricket app for Android or iOS.