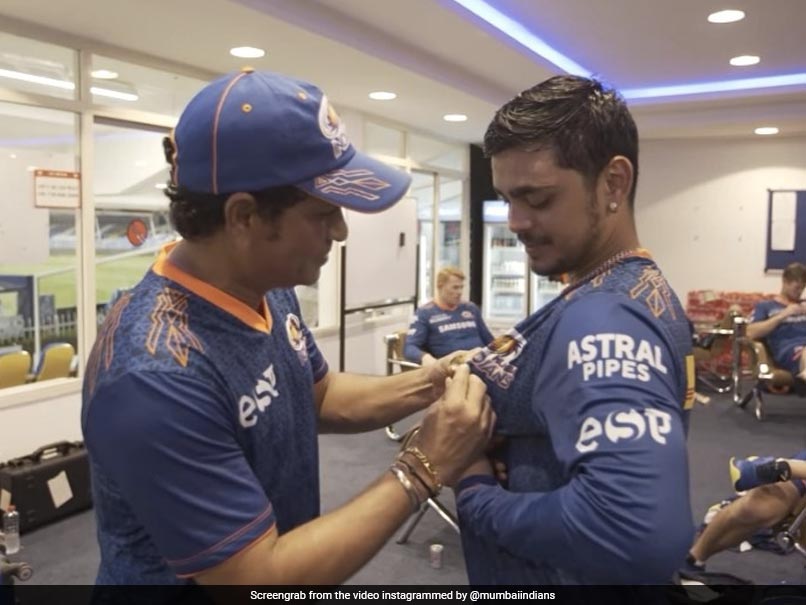 After helping Mumbai Indians (MI) defeat Rajasthan Royals (RR) by eight wickets in Match 51 of the ongoing Indian Premier League (IPL) 2021 season, Ishan Kishan was honoured by Sachin Tendulkar for his unbeaten half-century. The wicketkeeper-batsman smashed 50 off 25 balls, helping MI successfully chase a target of 91 runs. The India international, along with Jasprit Bumrah and James Neesham, received MI's Dressing Room Players of the Match awards for their role in the victory. Here is the video, which the franchise shared on their social media handles:

After receiving his award from team mentor Tendulkar, Kishan asked his teammates to put in a similar performance in their upcoming game against SunRisers Hyderabad (SRH) on Friday.

The defending champions are fifth in the league standings with only one more match to go. They are level on points with fourth-placed Kolkata Knight Riders (KKR) but have a lower net run-rate. KKR also have another match left before the playoffs.

The top-four teams from the IPL 2021 Points Table will qualify for the knockout stages, with Delhi Capitals (DC), Chennai Super Kings (CSK) and Royal Challengers Bangalore (RCB) having already progressed.

"It was a very good game and a much needed one for our team to get back in shape. Let's do it again in the next match", said Kishan.

Meanwhile, Jasprit Bumrah was also awarded by Zaheer Khan, who is MI's Director of Cricket Operations. Bumrah took two wickets in four overs as RR could only muster 90 for nine in 20 overs. The Indian pacer conceded just 14 runs in his spell.

"Really happy to get the win and let's take one game at a time which is the next one. Let's focus on what we can control and let's hope for the best", said Bumrah after receiving his award from the 2011 World Cup winner.

"It's good to be back. Good to be back out there after a long time. Let's keep it going", said the New Zealand all-rounder.

Chasing a target of 91 runs, MI easily raced to 94 for two in 8.2 overs. Other than Kishan's excellent knock, Nathan Coulter-Nile's four-wicket haul helped his side reduce RR to a paltry total.

Mahela Jayawardene IPL 2021 Rajasthan Royals vs Mumbai Indians, Match 51 Cricket
Get the latest updates on ICC Women's Cricket World Cup 2022 and IPL 2022, check out the Schedule , Live Score and IPL Points Table. Like us on Facebook or follow us on Twitter for more sports updates. You can also download the NDTV Cricket app for Android or iOS.