KKR vs RCB: Virat Kohli will resume his quest for his first IPL title with some fresh faces in the RCB camp as they take on KKR in Abu Dhabi on Monday. 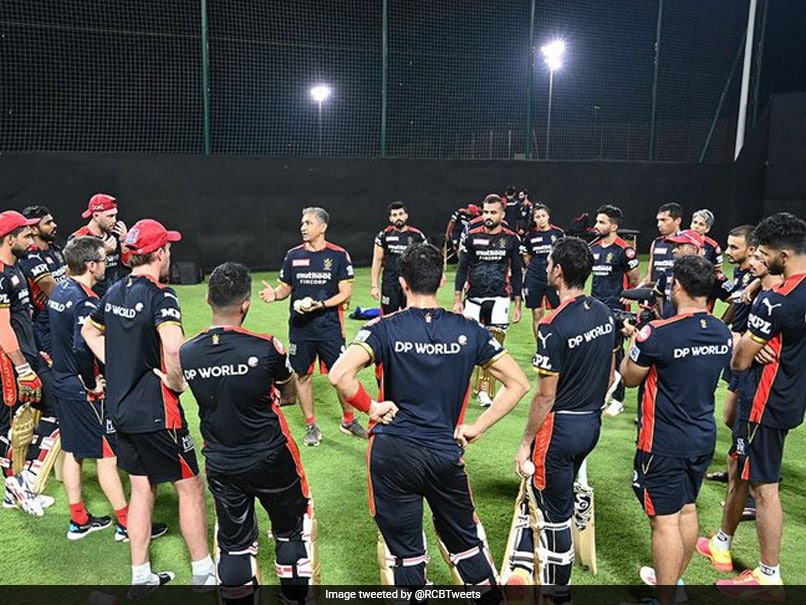 RCB have a few fresh faces after some international players pulled out of IPL 2021.© Twitter

Royal Challengers Bangalore, sitting pretty in third spot on the points table, will resume their Indian Premier League (2021) campaign against two-time champions Kolkata Knight Riders. The Virat Kohli-led side has some new faces in their squad with a few international stars pulling out of the UAE leg of the T20 league. Three Australian internationals Adam Zampa, Kane Richardson and Daniel Sams had pulled out of the remainder of IPL 2021. The Bangalore-based franchise signed Sri Lankan duo of Dushmantha Chameera and Wanindu Hasaranga as replacements while also roping in Singapore's Tim David to their squad.

The last time these two teams met in IPL 2021, RCB hammered KKR by 38 runs. RCB will once again look to repeat that performance when the two teams face off at the Sheikh Zayed Stadium in Abu Dhabi.

Here is the XI we think RCB will field against KKR on Monday:

Devdutt Padikkal: The young Indian opener made a name for himself in the UAE during IPL 2020 and has been a mainstay since then for RCB. Having already hit a century in the first-half of the tournament, RCB would be hoping for another good start from Padikkal.

Virat Kohli: RCB skipper is expected to open the innings with Padikkal against KKR. Despite scoring just one half-century in seven games, Kohli has notched up 198 runs and will be looking to get the team off to a good start.

Glenn Maxwell: The explosive Australian batsman found his groove during the first-half of IPL 2021, scoring 223 runs at a strike rate of over 144. RCB will be hoping that Maxwell can take down KKR's spinners in the middle overs.

Rajat Patidar: The 28-year-old played in the middle order for RCB in IPL 2021 first-half and is expected to start again against KKR.

Kyle Jamieson: The New Zealand all-rounder was lethal with the ball in the first-half of the tournament with nine wickets in seven games. Kohli will rely on Jamieson to put in a similar performance in the UAE leg of IPL 2021.

Shahbaz Ahmed: The left-arm spinner shot to fame following his exceptional spell against SRH where he snared three wickets and gave away just seven runs. With UAE pitches known to offer help to the spinners, Shahbaz is expected to start for RCB.

Wanindu Hasaranga: Hasaranga impressed one and all during India's tour of Sri Lanka earlier this year where he picked up seven wickets in three T20Is. He might partner Yuzvendra Chahal in the absence of Washington Sundar, who has been ruled out with injury.

Mohammed Siraj: Mohammed Siraj's performance in IPL 2020 in the UAE last year earned him a call-up to the Test team and the pacer hasn't looked back since. Kohli will rely on Siraj to provide initial breakthroughs against KKR.

Harshal Patel: Roped in from Delhi Capitals for the IPL 2021, Harshal Patel repaid the faith shown in him by RCB by taking a five-wicket haul against Mumbai Indians. Harshal will look to continue his good run in the IPL.

Yuzvendra Chahal: The leg-spinner has a point to prove in the UAE leg of IPL 2021 after missing out on the T20 World Cup. Chahal will look to use his experience and put in a solid performance for RCB.

Glenn Maxwell Devdutt Padikkal Kolkata Knight Riders vs Royal Challengers Bangalore, Match 31 IPL 2021 Cricket
Get the latest updates on T20 World Cup, check out the T20 World Cup Schedule and Live Score . Like us on Facebook or follow us on Twitter for more sports updates. You can also download the NDTV Cricket app for Android or iOS.