Watch: RCB Play Their First Practice Match Ahead Of IPL 2021 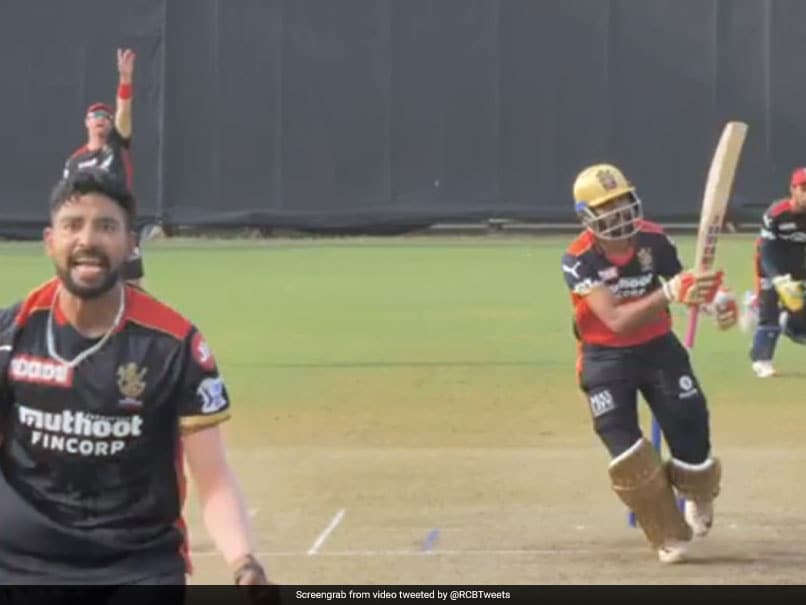 IPL 2021is around the corner and players are working hard to be in the best possible shape going into the tournament. While some franchises are looking to add to their trophy cabinet, teams like Royal Challengers Bangalore (RCB) led by Virat Kohli, are looking to end their title drought. RCB, who face off defending champions Mumbai Indians in the opening match of IPL 2021, played an intra-squad practice match to test their skills in a real match-like situation. With some of their players still in quarantine, RCB only had 12 players available for the match, including the likes of Yuzvendra Chahal, Navdeep Saini, Mohammed Siraj.

Rajat Patidar, who was bought this year for his base price of Rs 20 lakh, scored a quickfire half-century (54 off just 35 balls) while Suyash Prabhudessai scored 25 off 15 balls as the team batting first were bowled out for 153 runs. Saini gave away 40 runs but picked up three crucial wickets whereas Chahal bowled brilliantly and returned with figures of 2 for 20.

However, the star of the day was all-rounder Harshal Patel who fired with both the bat and ball. First picking up two wickets and then getting the team over the line with more two overs to spare with a quickfire cameo. He was awarded Man of the Match for his all-round performance.

RCB, despite their poor run of form towards the end of last season qualified for the playoffs but lost to SunRisers Hyderabadin the Eliminator.

Forgetting the disappointment of last season, the Virat Kohli-led side would want to string in more consistent performances this year as they look to get their hands on the coveted title for the first time.

Harshal Patel IPL 2021 Cricket
Get the latest updates on ICC Women's Cricket World Cup 2022 and IPL 2022, check out the Schedule , Live Score and IPL Points Table. Like us on Facebook or follow us on Twitter for more sports updates. You can also download the NDTV Cricket app for Android or iOS.