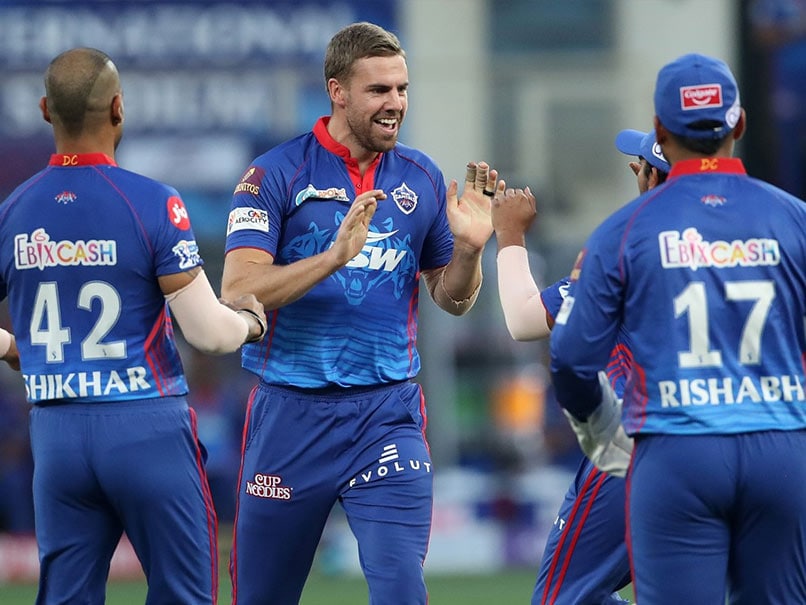 IPL 2021: Anrich Nortje was player of the match for his figures 2/12 in 4 overs vs SunRisers Hyderabad.© BCCI/IPL

South African bowlers Anrich Nortje and Kagiso Rabada helped set up an eight-wicket win for Delhi Capitals on Wednesday in an Indian Premier League match that went ahead despite a SunRisers Hyderabad player testing positive for coronavirus. Hyderabad left-arm quick Thangarasu Natarajan and six of his close contacts were isolated hours before the latest match in the Twenty20 tournament in Dubai. An IPL release said Natarajan is "currently asymptomatic" while the contacts and other Hyderabad players all returned negative tests.

On the field, Nortje returned figures of 2-12 and fellow Proteas quick Rabada took three wickets to further hurt Hyderabad who managed just 134-9 after electing to bat.

Shikhar Dhawan lay the foundations for Delhi's chase with his brisk 42 and then Shreyas Iyer (47) and skipper Rishabh Pant (35) took the team home in 17.5 overs with an unbeaten stand of 67 for the third wicket.

The left-handed Dhawan leads the IPL 2021 batting chart with 422 runs including three half-centuries in nine matches.

Delhi, who are still searching for their first IPL title, moved back to the top of the eight-team table. Hyderabad stay at the bottom with seven losses from eight matches.

"We have one of the quickest bowlers in the world so I think they're great assets to have," Pant said of his team's pace duo of Nortje and Rabada.

Hyderabad, who are missing England star Jonny Bairstow, lost regular wickets after Australia's David Warner fell to Nortje without scoring on the third ball of the match.

Bairstow was one of the many England and international stars including Ben Stokes and Pat Cummins of Australia to pull out of the pandemic-hit league.

Nortje bowled express pace with one of his deliveries recorded at 151 kmph (93.8mph) and was ably supported by Rabada.

Williamson called Nortje and Rabada "two of the best fast bowlers going around in world cricket".

Marcus Stoinis bowled 1.1 overs before he went off the field with a strained hamstring and fellow Australian Steve Smith stood in as substitute fielder for the rest of the innings.

The IPL only resumed Sunday in the United Arab Emirates after a five-month suspension because of a devastating surge in Covid-19 deaths in India.

Teams returning to the event in the UAE have been put in strict bio bubbles.

Sunrisers Hyderabad IPL 2021 Delhi Capitals vs Sunrisers Hyderabad, Match 33 Cricket
Get the latest updates on ICC T20 Worldcup 2022, check out the Schedule and Live Score. Like us on Facebook or follow us on Twitter for more sports updates. You can also download the NDTV Cricket app for Android or iOS.