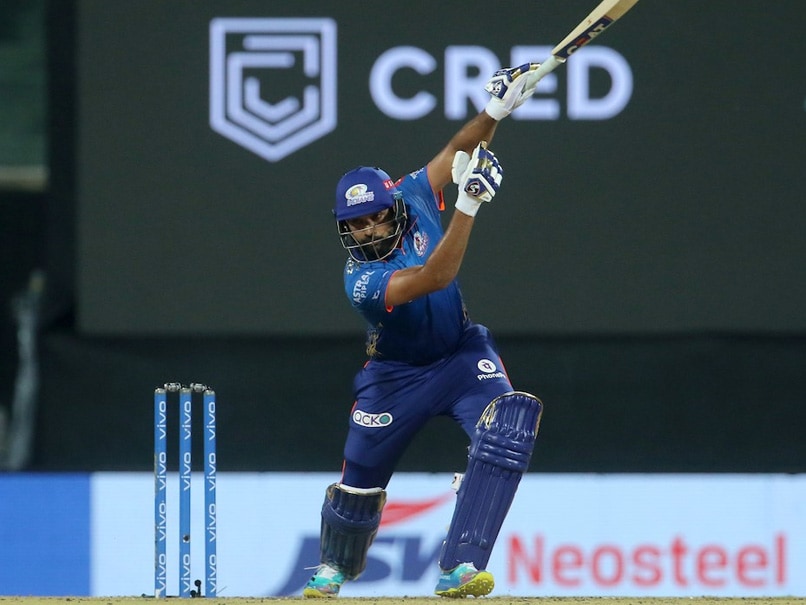 Rohit Sharmaplayed one of the most outrageous shots of the Indian Premier League (IPL) 2021so far, when he smashed a one-handed six off Ravichandran Ashwin's bowling in Chennai. On the final delivery of the fourth over, Ashwin went wide of the crease and tossed up a delivery to which Rohit Sharma gave himself a bit of room and lofted it inside-out over the extra cover boundary for a 78-metre six. Even as one hand came off the handle, the sumptuous timing on Rohit's shot ensured that the ball sailed all the way into the stands, fetching him six runs.

Looking for their third consecutive win of the season, the Mumbai Indians skipper won the toss and opted to bat against Delhi Capitals. Marcus Stoinis struck early to dismiss Quinton de Kock for just one run.

Rohit and Suryakumar Yadav added a crucial 58-run stand for the second wicket, putting Mumbai's innings back on track. Suryakumar played some beautiful shots during his short stay, as he raced to 24 off 15 balls, but was undone in the seventh over by Avesh Khan, who has been having a breakthrough season with Delhi Capitals.

Rohit also fell soon on 44 as he came charging down the track but was caught comfortably by Steve Smith at long-on.

After watching Rohit getting down the pitch, Mishra bowled wide, forcing him to fetch the ball from outside off stump. Rohit failed to get to the pitch of the ball, but still went with his shot and ended up paying the price.

Defending a modest total, Mumbai bowlers made it hard for Delhi Capitals batsmen but Shikhar Dhawan scored a gritty 45 off 42 balls as they chased down the target with five balls to spare.

MA Chidambaram Stadium, Chennai IPL 2021 Cricket Delhi Capitals vs Mumbai Indians, Match 13
Get the latest updates on ICC Women's Cricket World Cup 2022 and IPL 2022, check out the Schedule , Live Score and IPL Points Table. Like us on Facebook or follow us on Twitter for more sports updates. You can also download the NDTV Cricket app for Android or iOS.