Yashasvi Jaiswal Says Looking To Learn From Seniors During IPL 2020

Yashasvi Jaiswal was picked by Rajasthan Royals for INR 2.4 crore in the player's auction which was held in December 2019. 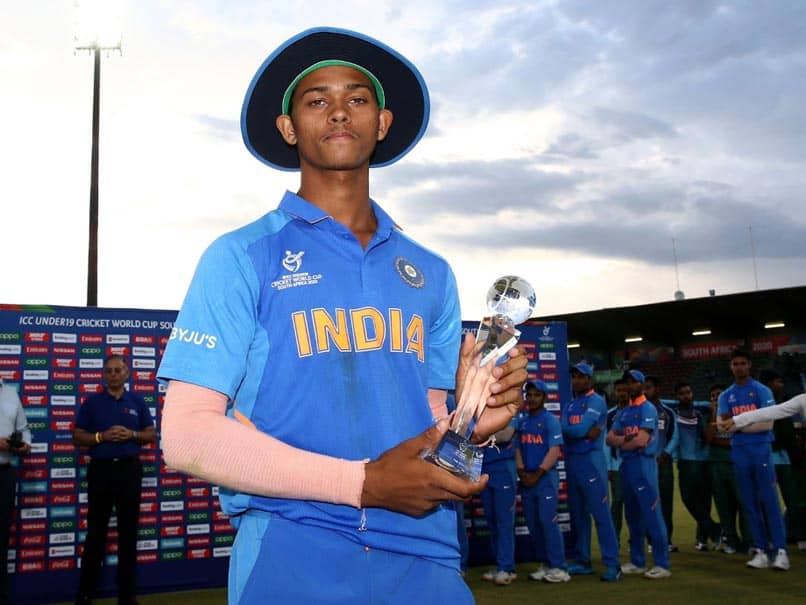 Yashasvi Jaiswal thanked Rajasthan Royals for giving him the opportunity to play in the IPL.© ICC

The Indian Premier League (IPL) has time and time again proved to be the biggest breeding ground for the young cricketers, and it is a platform from where youngsters can strike a chord with the national selectors to get into the Indian setup. One such youngster looking to make a mark this year will be 18-year-old Yashasvi Jaiswal. Yashasvi was picked by Rajasthan Royals for INR 2.4 crore in the player's auction which was held in December 2019, and now he would be hoping to put in match-winning performances for the side. The left-handed batsman had an amazing U-19 World Cup this year as he managed to score 400 runs to finish as the leading run-scorer.

In an interaction with ANI, Yashasvi opened up about his hopes from the stint with Rajasthan Royals, life in a bio-secure bubble and his excitement to share the dressing room with the likes of Jos Buttler, Steve Smith and Ben Stokes.

"I am looking to learn as much as I can from the senior players around me. They have a lot of experience across formats, something I am looking to consume and apply to myself. There is a big difference between U-19 cricket and senior-level cricket and I'll probably have to start from scratch. For me, it's about working hard and learning from other senior players. Luckily I have a lot of players around me here in Rajasthan Royals from whom I can learn more about international cricket," Yashasvi said.

"The IPL is one of the best tournaments in the world. It is my first IPL and obviously I would be looking to do well with the chances I get and make the most of it. I am willing to bat anywhere for the team, it'll be good for my development no matter where I bat. The IPL is a tough competition and batting anywhere in the order tests your skill differently, so yeah I'm looking forward to the challenge of fulfilling the role assigned to me and give the best results for my team," he pointed.

Asked what he wants to learn from experienced campaigners like Smith, Buttler, and Stokes, Yashasvi said: "Firstly, I feel this would an honour and a privilege to play cricket with them and share the dressing room with them. I am really excited to be teaming up with some top international players in the IPL. I would be watching them closely and would be looking to talk to them and learn from their experience over the years, hopefully learn a lot regarding the mindset that they carry out on the field. Also, the atmosphere has been so nice, we have full freedom to express ourselves and go up to Sanju (Samson), Robin Bhaiya (Uthappa) to ask anything that we want."

Yashasvi is being pitted as the next big thing in Indian cricket and surely it must come with added pressure. But displaying a cool and calm head, Yashasvi says that he is not bothered with the outside noise, and is just looking to better his game with each minute.

"From a personal point of view, the U-19 World Cup was good for me. However, it was disappointing to not win the final but again that's in the past now. I'm now looking forward to working hard and contributing towards my team. I don't pay a lot of attention to the outside noise, I like to focus on my game and perform to the best of my abilities. These are talks of too far in the future, obviously, I want to play for India in the future but right now I'm focussing on the IPL and hoping to do well here in the UAE," said Yashasvi.

Rajasthan Royals was the first franchise to reach the UAE on August 21. Upon reaching UAE, all the players quarantined themselves for six days, and after getting three negative tests for COVID-19, they started training for the upcoming edition of the tournament.

When asked about the challenges of staying in a bio-secure bubble, Yashasvi said: "It is different and quite a challenge to be in such a bubble. It's unlike anything I've experienced before. However, on the other hand, the bubble itself is so well set-up that we do not get bored at any time. There is a lot to do here, various facilities that we can use to entertain ourselves, a beautiful team room to hang out with my teammates and spend quality time. The franchise has done brilliantly to provide each one of us with private space for our personal use."

"The private beach is also a massive boost as it helps us get out of the room and safely wander during the day on the beach, and have a bit of a change. It is a challenge to stay inside a bio-secure bubble but again that is something which is important and needs to be done for everyone's safety, so not a big issue for me personally on that front. To be fair, the set-up has been really good for us and helps us stay fresh and relax within the environment," added the 18-year-old.

The initial part of the tournament would be played without fans as a precautionary measure against the coronavirus. The big match players may find it hard initially to adjust to this change, but Yashasvi says that the players need to just focus on giving their best in the tournament.

"I don't think playing behind closed doors is too much of a change for me personally. We would have all loved to have fans come and watch the IPL but given the situation, we need to understand that it is for everyone's safety and is in the best interest of everyone. Besides, I am quite used to playing in empty, near-empty stadiums, so for me personally not too much of a difference, and I would just need to focus on my game and work hard to entertain fans from around the world who will be watching us on TV," said Yashasvi.

Lastly, Yashasvi concluded by saying that he just hopes of gaining international-quality experience with this stint as a Rajasthan Royals player.

"I am really thankful to the Royals for giving me this opportunity to play in the IPL. I am really excited to be a part of a special franchise and participate in the year's IPL. I hope of gaining some valuable international level experience through this IPL and a chance to showcase my ability, give my hundred percent for the team. Hopefully, helping the team win some matches," Yashasvi signed off.

Ben Stokes Cricket
Get the latest updates on India vs Australia Series, check out the India vs Australia Schedule for 2020-21 and Ind vs Aus live score . Like us on Facebook or follow us on Twitter for more sports updates. You can also download the NDTV Cricket app for Android or iOS.