IPL 2020: MS Dhoni And Faf du Plessis In Smashing Action Again, But With A Difference. Watch

Chennai Super Kings took to Twitter to share behind-the-scene footage to reveal the fun side of MS Dhoni and Faf du Plessis, at the cost of young Monu Singh. 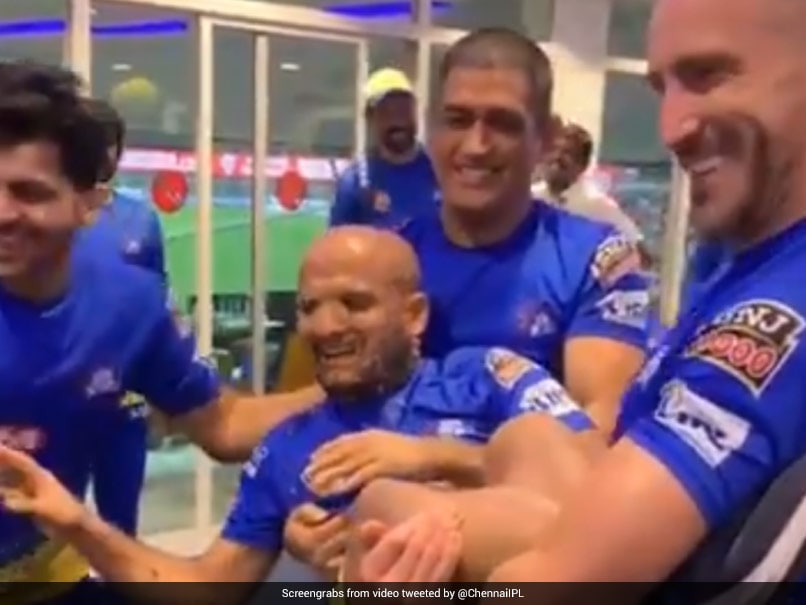 MS Dhoni might have failed to take Chennai Super Kings to the playoffs for the first time but in his final game in this year's Indian Premier League, the former India captain confirmed that he will back next year, donning the yellow jersey. On Thursday, CSK took to Twitter to share a video in which MS Dhoni and Faf du Plessis can be seen giving a pre-birthday cake smash to young pacer Monu Singh at leg-spinner Karn Sharma's birthday celebration. "At Karn's birthday bash, guess who had a pre-birthday smash... #SuperBirthdayMonu @msdhoni #WhistlePodu," the video was captioned.

CSK had a forgettable season in IPL 2020 as they failed to qualify for the playoffs for the first time ever in tournament's history.

The three-time IPL champions finished seventh on the points table with six wins from 14 matches.

Faf du Plessis was the top run-getter for CSK in the 13th edition of the IPL.

Dhoni, playing his first competitive tournament after the 2019 World Cup semi-final, failed with the bat in IPL 2020.

The CSK skipper scored just 200 runs and his strike rate was also below 117.

After the final league game against Kings XI Punjab, Dhoni highlighted the fact that the team management will look to shuffle the core of the team and prepare a team that can serve them for the coming decade.

Dhoni also assured fans that CSK will come back stronger next year.

Faf du Plessis Monu Kumar IPL 2020 Cricket
Get the latest updates on ICC Women's Cricket World Cup 2022 and IPL 2022, check out the Schedule , Live Score and IPL Points Table. Like us on Facebook or follow us on Twitter for more sports updates. You can also download the NDTV Cricket app for Android or iOS.