RCB vs KKR, IPL 2020: Virat Kohli said that they were thinking of a total in the region of 165-170 but AB De Villiers' "special knock" helped them get much more than that. 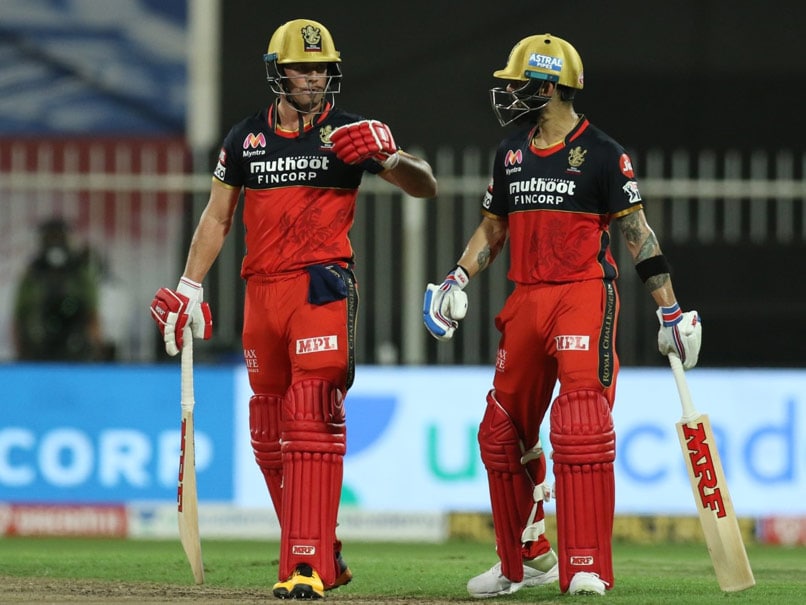 Royal Challengers Bangalore (RCB) skipper Virat Kohli heaped praise on AB de Villiers for his side's massive 82-run win over Kolkata Knight Riders (KKR) at the Sharjah Cricket Stadium on Monday. On a pitch where most batsmen, including Kohli, found it hard to get going, de Villiers' unbeaten 33-ball 73 shifted the momentum completely, helping them post a formidable total of 194/2 in their 20 overs. De Villiers and Kohli stitched an unbeaten 100-run partnership for the third wicket, with 83 of them coming in the last five overs. Kohli could score only one boundary in his 28-ball 33, while de Villiers smashed sixes for fun from the other end, scoring 11 boundaries including six hits over the fence. Kohli admitted that everyone barring one "superhuman" struggled to score runs on that pitch as the ball was not coming onto the bat nicely.

"At the toss the pitch didn't have the usual Sharjah sheen. Knew the wicket was going to get slower and slower. Barring one superhuman, everyone struggled on that pitch," Kohli said at the post match presentation.

Kohli said that they were thinking of a total in the region of 165-170 but got much more than that only because of the "special knock" of one man.

"Was unbelievable. I thought I had a few balls under my belt so I'll start striking. But he came in and hit his third ball nicely. On a pitch like that, only AB can do that. It was a special knock. We got 195 (194 actually) purely because of the genius of that man," said RCB skipper, heaping praise on de Villiers.

Talking about the positives from the game, Kohli said: "They've (KKR) played good cricket in this IPL. Coming here, it was important to get the right start. Great to see individuals step up when the team requires. Bowling unit, with Morris coming in, looks all the more potent. Very happy".

This was RCB's fifth win from seven games and they climbed to the third spot in the points table. This massive win also helped them improve their net run-rate which had taken quite a beating after a 97-run loss against Kings XI Punjab.

RCB have been one of the biggest underachievers in the IPL history despite the fire-power but things seem to have changed this year, with Virat Kohli and Co. getting confident with each passing game.

Kohli said that this year they have a "clarity of plans" and the players know what to do on the field. While his side is on an upward trend, he warned players to not get complacent as there is always a scope for improvement.

"Preparation was really good. Three week camp helped us. Have clarity of plans. Know exactly what we want to do on the field. All depends on the mindset. It's very positive. If your bowling unit is strong, you have a great chance of going deep in the tournament. Always things you can reflect on and say you can improve on these things. All about taking this momentum forward. Don't want to be complacent," he added.

RCB will have an opportunity to avenge their massive defeat they faced earlier this season when they take on Kings XI Punjab in their next league game on October 15 in Sharjah.

AB de Villiers Sharjah Cricket Association Stadium, Sharjah IPL 2020 Cricket Royal Challengers Bangalore vs Kolkata Knight Riders, Match 28
Get the latest updates on IPL Auction 2023 and check out  IPL 2023 and Live Cricket Score. Like us on Facebook or follow us on Twitter for more sports updates. You can also download the NDTV Cricket app for Android or iOS.