IPL 2020: RCB, who are currently third in the IPL Points Table, will be playing four games in eight days. 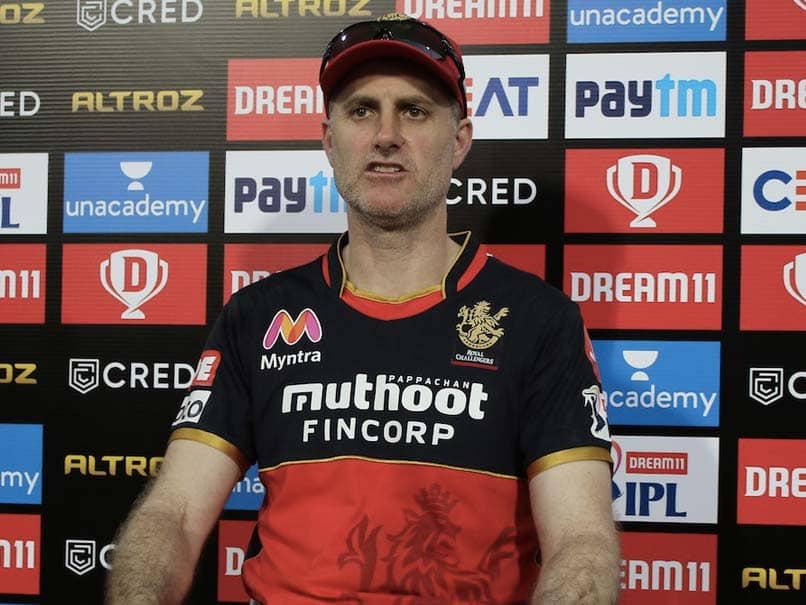 IPL 2020: Simon Katich feels the next phase of matches will be crucial for RCB.© BCCI/IPL

After suffering a 59-run defeat against Delhi Capitals, Royal Challengers Bangalore (RCB) head coach Simon Katich said that the next eight days will make or break the tournament for the team as they are set play four matches in quick succession. His comments came as RCB failed to chase down 197-run target and were restricted to 137/9. None of the RCB batsmen fared well besides Virat Kohli who scored 43. AB de Villiers had an off day with the bat as he just managed to score nine runs. He was sent back to the pavilion by Anrich Nortje. For Delhi, Kagiso Rabada was the pick of the bowlers as he returned with the figures of 4-24.

"In the next phase, we have four games in eight days, it's going to be tough, this is where we will make or break the tournament. I still want us to be really positive," Katich told his players after the match in a video posted on the official Twitter handle of RCB.

Delhi Capitals posted a total of 196/4 as Prithvi Shaw and Marcus Stoinis played knocks of 42 and 53 respectively. Stoinis had come to the crease with Delhi at 90/3 in the 12th over and it was then that the Australian all-rounder went on to play a knock of 53 from just 26 balls with the help of six fours and two sixes.

For RCB, Mohammad Siraj was the pick of the bowlers as he scalped two wickets. Both the in-form bowlers like Yuzvendra Chahal and Navdeep Saini had an off day for RCB. Chahal and Saini did not even complete their quota of four overs.

"Early on we gave them momentum, and from there on, we were never able to come back, they got us to a good start in the powerplay, from there on we were playing catch up. We managed to get back in the middle but towards the end of the innings, we leaked runs and missed catches, that cost us 15-20 runs extra. We were outplayed from Delhi, they were really disciplined, they played the conditions really well. We need to be smarter as to what we do with the shorter and longer boundary," Katich said.

RCB skipper Kohli also told his teammates that there is no need to panic and the side should look to come back strong in their next match against Chennai Super Kings on October 10.

"It is a good time to reflect, let us think about what we can improve upon, according to me its a great phase to play as we have back-to-back games, if we get some momentum we can really run through some teams. Let's look forward to our next game, I still feel there is good energy in the group, let us stay calm and come back on Saturday," said Kohli.

Virat Kohli IPL 2020 Royal Challengers Bangalore vs Delhi Capitals, Match 19 Cricket
Get the latest updates on IPL 2021, IPL Points Table , IPL Schedule 2021 , live score . Like us on Facebook or follow us on Twitter for more sports updates. You can also download the NDTV Cricket app for Android or iOS.