IPL 2020, MI vs SRH: Defending champions Mumbai Indians registered their second win in a row and moved to the top of the points table, after beating SunRisers Hyderabad (SRH) by 34 runs in Sharjah. 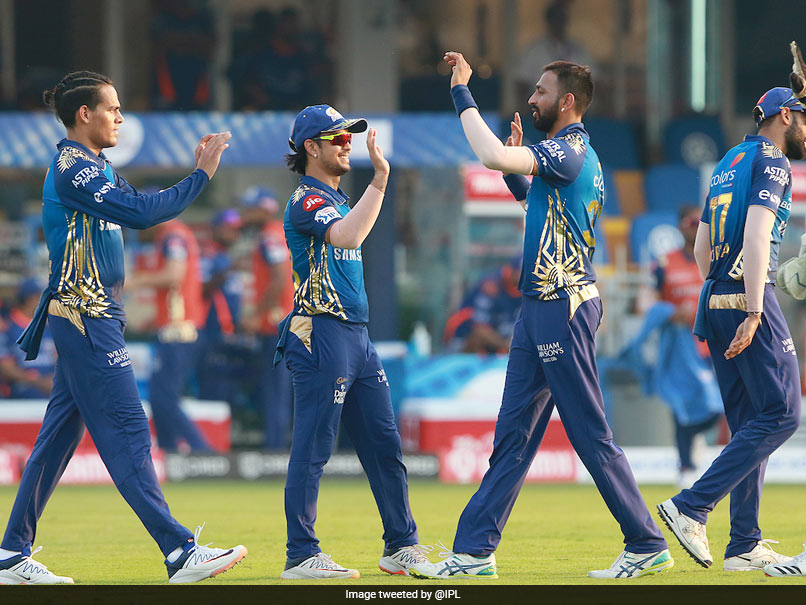 Defending champions Mumbai Indians registered their second win in a row and moved to the top of IPL 2020 Points Table, after beating SunRisers Hyderabad (SRH) by 34 runs in a high-scoring contest at the Sharjah Cricket Stadium on Sunday. Chasing 209 to win, David Warner and Jonny Bairstow got their side off to a good start, adding 34 runs in first four overs. Trent Boult broke the partnership sending Bairstow back to the pavillion in the fifth over. Warner and Manish Pandey batted with intent and didn't allow the required run-rate to get out of their reach. However, just when the game was looking in the balance, James Pattison got rid of Manish Pandey in the 10th over to derail their chase. From there on, Warner fought as a lone warrior as none of the SRH batsmen gave him enough support from the other end. Warner, the most successful overseas batsman in IPL history, completed his first half-century of the season, scoring 60 off 44 balls, but couldn't get his side across the finish line.

With three wins from five games, Mumbai are level on points with Delhi Capitals and Royal Challengers Bangalore (RCB), who have played one match less. Mumbai's superior net run-rate has helped them rise to the top of the points table, at least for a day, as RCB face Delhi on Tuesday.

Earlier, Quinton de Kock scored his first fifty of the season as Mumbai Indians posted a formidable 208/5 in 20 overs. De Kock, struggling for form before this game, announced his arrival with a well-crafted 67 off 39 balls, providing a solid platform for the pinch hitters like Hardik Pandya and Kieron Pollard.

After deciding to bat, Mumbai Indianssuffered a major blow as they lost their skipper Rohit Sharma cheaply in the first over. Rohit started brilliantly pulling Sandeep Sharma over midwicket for a six but fell on the very next delivery after he tried to fetch a wide delivery.

After his departure, De Kock combined with Suryakumar Yadav (27 off 18 balls) and batted sensibly and added 42 runs for the second wicket, without taking undue risks. Siddarth Kaul struck on the penultimate delivery of the Powerplay to break the partnership.

Ishan Kishan walked out to bat at No. 4 and laid the strong foundation batting alongside South Africa's limited-over skipper. Carrying on with his good form, Ishan Kishan scored 31 off 23 balls, with the help of one four and two maximums.

SRH bowlers pulled things back, removing both of them in quick succession. De Kock skied one up high in the air and Rashid Khan took a brilliant catch off his his own bowling, while Manish Pandey pulled off a flying catch near the ropes to end Ishan's innings.

It was a tailor-made condition for Mumbai Indians' big hitters Hardik Pandya and Kieron Pollardand they didn't disappoint, hitting deliveries to all parts of the ground. Hardik got out on the final over after a 19-ball 28 and was replaced by his elder brother Krunal Pandya at the crease. With just four deliveries left, Krunal went all guns blazing and smashed 20 off just four balls to take Mumbai Indians total past 200-run mark.

Rohit Sharma Sharjah Cricket Association Stadium, Sharjah IPL 2020 Mumbai Indians vs Sunrisers Hyderabad, Match 17 Cricket
Get the latest updates on ICC T20 Worldcup 2022 and CWG 2022 check out the Schedule, Live Score and Medals Tally. Like us on Facebook or follow us on Twitter for more sports updates. You can also download the NDTV Cricket app for Android or iOS.