IPL 2020: Jonty Rhodes will be all keyed up about KXIP's crucial game and his son also got into the act. 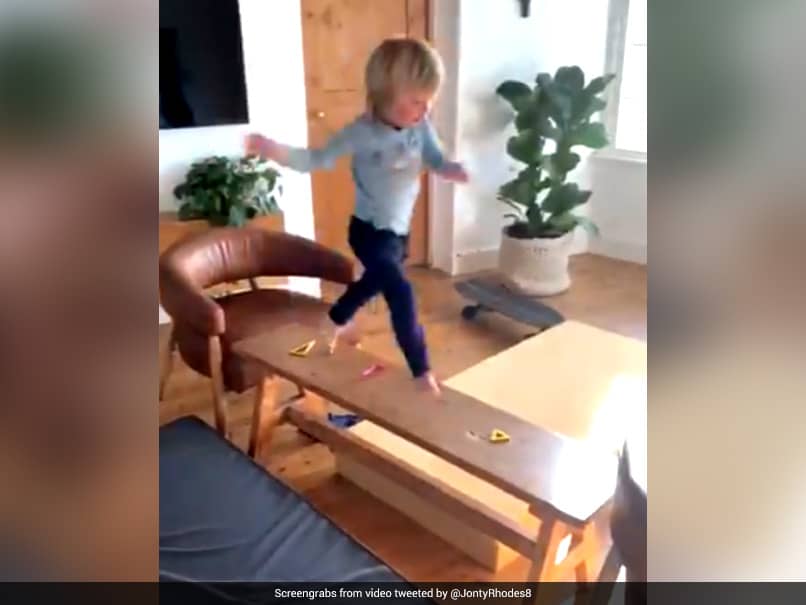 Jonty Rhodes' son Nathan jumped from one platform to the other with great finesse.© Twitter

Kings XI Punjab (KXIP) fielding coach Jonty Rhodes, ahead of their league game against Rajasthan Royals on Friday, took to Twitter to share a video of his three-year-old son Nathan Rhodes completing an obstacle course with great zeal. Jonty Rhodes, regarded as one of the greatest fielders, was known for his agility and sharpness and it seems like that his son has also inherited the same traits from his father. In the video, Nathan can be seen jumping from one platform to the other with great finesse, something that is not associated with a three-year-old child. Sharing the video on his Twitter handle, Jonty wrote: "Nathan Rhodes warming up for today's @lionsdenkxip match #IPL2020 #saddapunjab #lioncub".

With Jonty Rhodes as their fielding coach, Kings XI Punjab fielders have been electric on the field, pulling off some incredible catches and diving at full length to save crucial runs for the team.

Watching a three-year-old kid showing such athleticism made fans fall in love with Nathan and they shared their expressed their emotions in large numbers.

Super cute. The way he climbs and lunges ... he is already a little Jhonty. God bless.

Wow!
Nathan is a Champion in making.
May Almighty bless him!

Disclaimer: don't try this at home, should be trained by Jonty Sir

Two of the best fielding efforts of the season involves KXIP players. Nicholas Pooran and Mayank Agarwal defied gravity and took a high leap in the air near the fence to pull inside a ball that would have otherwise given the opposition six runs.

Kings XI Punjab, after a terrible start to the season where they won only one out of their first seven games, have seen a remarkable turnaround, winning five games in a row.

The KL Rahul-led side for the majority of the IPL 2020 campaign were languishing at the bottom of the club but have emerged as one of the top contenders to qualify for the playoffs.

With 12 points from as many games, they are placed fourth on the points table, after Kolkata Knight Riders lost to Chennai Super Kings on Thursday.

Rajasthan Royals Jonty Rhodes IPL 2020 Cricket
Get the latest updates on India vs England Series, India vs England , live score and IPL 2021 Auction . Like us on Facebook or follow us on Twitter for more sports updates. You can also download the NDTV Cricket app for Android or iOS.