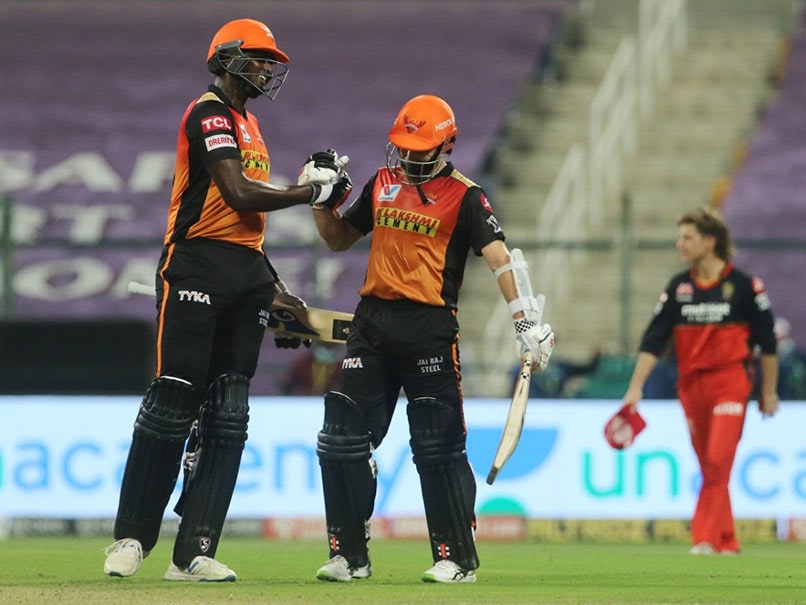 Kane Williamson, Jason Holder kept their calm and guided SunRisers Hyderabad to a 6-wicket win over Royal Challengers Bangalore in IPL 2020 Eliminator in Abu Dhabi on Friday. Chasing a modest total of 132 runs, SRH got off to a poor start as opener Shreevats Goswami departed for a duck in the first over bowled by Mohammed Siraj. After his dismissal, skipper David Warner (17 off 17 balls) and Manish Pandey (24 off 21 balls) got their act together and stitched a 41-run stand for the second wicket. With their side looking to finish the Powerplay on a strong note, Warner's contentious dismissal in the sixth over brought RCB back in the game. Siraj cramped Warner for room and the ball went past close to his bat and, prompting a huge appeal from RCB players, but the on-field umpire was unmoved. Kohli challenged the decision and the TV umpire, after examining replays from all possible angles, ruled in RCB's favour, leaving Warner shocked.

Manish Pandey couldn't hold fort for long and departed after a well-made 24, with the help of three fours and one maximum. He tried to late cut an Adam Zampa delivery but played it too close to de Villiers who grabbed a good catch to end his innings. Priyam Garg also fell in quick succession which put the game in balance.

Kane Williamson and Jason Holder then took the game deep and batted RCB out of the game with an unbeaten 65-run stand for the fifth wicket. Williamson toiled hard for his fifty but it turned out well for his side as they ended the night on the right side of the result. He got a decent support from Holder who came and smashed some crucial boundaries under pressure. He ended with 24 not out off 20 balls, with the help of three boundaries.

Earlier, Warner won the toss and opted to bowl in a knockout contest. RCB experimented with their opening order, sending skipper Virat Kohli to open the innings but it backfired as he got out to Holder in the second over, trying to glance a leg stump delivery but ended up handing a simple catch to the wicket-keeper.

RCB suffered another major blow in the fourth over as their top-scorer Devdutt Padikkal also departed cheaply, getting out to Holder.

Aaron Finch, batting at number three for the first time this season, joined hands with AB de Villiers to rebuild RCB's innings. The duo batted slowly which allowed SRH bowlers to dominate the game in the middle overs.

Shahbaz Nadeem broke the partnership as he dismissed Finch in the 11th over. Moeen Ali had a night to forget as he got out for a golden duck that too on a free-hit in the same over.

RCB were banking on de Villiers to get them to a fighting total but SRH's death over  specialist T Natarajan played the spoilsport as he shattered those hopes, cleaning up de Villiers with a perfect yorker. SRH bowlers' great show meant Virat Kohli's side could only manage 131/7 from their 20 overs.

SRH will now face Delhi Capitals in the Qualifier 2 at the Sheikh Zayed Stadium, Abu Dhabi on November 8.

AB de Villiers IPL 2020 Cricket Sunrisers Hyderabad vs Royal Challengers Bangalore, Eliminator
Get the latest updates on Fifa Worldcup 2022 and check out  Fifa World Cup Schedule, Stats and Live Cricket Score. Like us on Facebook or follow us on Twitter for more sports updates. You can also download the NDTV Cricket app for Android or iOS.