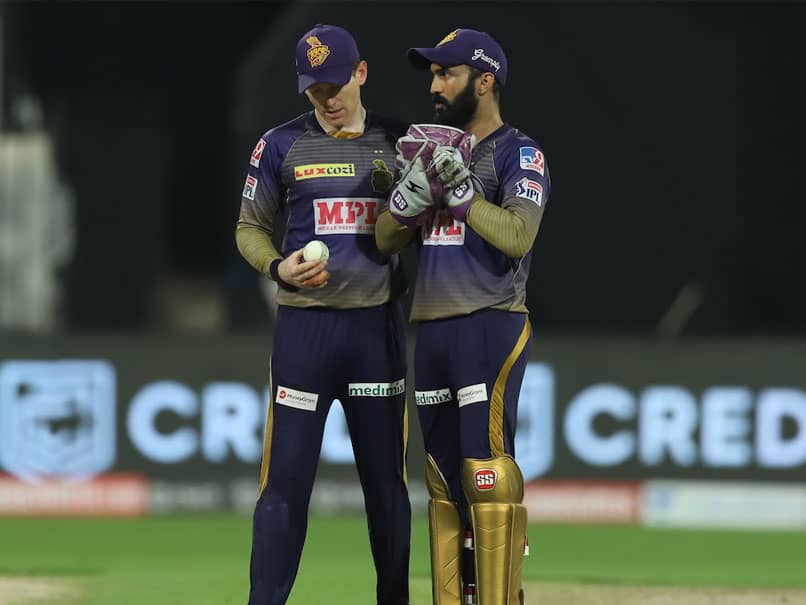 IPL 2020: Dinesh Karthik has handed over the KKR captaincy to Eoin Morgan.© BCCI/IPL

Dinesh Karthik has decided to hand over the Kolkata Knight Riders captaincy to England's limited-overs skipper Eoin Morgan, the franchise announced on their website on Friday. According to the website, Dinesh Karthik made the decision to focus on his batting and "contributing more to the team's cause". The KKR management thanked Karthik for his contributions as captain "over the past two and a half years" and wished Eoin Morgan the best going forward. Kolkata Knight Riders will be seen in action on Friday, when they take on defending champions Mumbai Indians at the Sheikh Zayed Cricket Stadium in Abu Dhabi.

"We are fortunate to have leaders such as DK, who has always put the team first. It takes a lot of courage for someone like him to take a decision such as this. While we were surprised by his decision, we are respectful of his wishes. We are also fortunate that Eoin Morgan, the 2019 World Cup-winning captain, who has been the vice captain, is willing to lead the side going forward," Venky Mysore, CEO of KKR, was quoted as saying on the official website.

"DK and Eoin have worked brilliantly together during this tournament and although Eoin takes over as captain, this is effectively a role swap and we expect that this transition will work in a seamless manner," he added.

Eoin Morgan's first assignment as captain doesn't get much harder than the task at hand with KKR facing an in-form Mumbai Indians team later today.

KKR have blown hot and cold this season, and Morgan will be tasked with bringing more consistency to the team's performance. KKR are currently fourth on the IPL 2020 Points Table with four wins and three losses to their name.

However, they have lost two of their last four matches with the inconsistencies within the team coming to the fore.

Karthik himself has had a tumultuous time with the bat. Barring a quickfire 58 against Kings XI Punjab, the wicketkeeper-batsman has failed miserably.

He has a total of 108 runs from seven games at an average of 15.42. Morgan, on the other hand, has fared much better despite the constant chopping and changing in his batting position.

The Irishman has played all seven games for KKR so far this season, scoring 175 runs at an average of 35 and a strike-rate of 129.62. He is in fact the second highest run-getter for KKR in IPL 2020, behind Shubman Gill.

Eoin Morgan IPL 2020 Cricket
Get the latest updates on IPL 2021, IPL Points Table , IPL Schedule 2021 , live score . Like us on Facebook or follow us on Twitter for more sports updates. You can also download the NDTV Cricket app for Android or iOS.