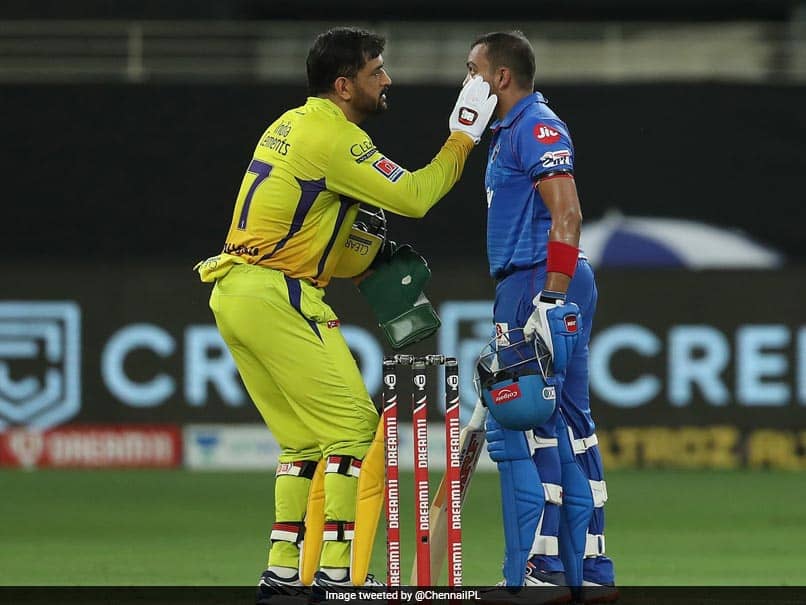 Chennai Super Kings (CSK) skipper MS Dhoni was hailed by fans following a wonderful display of sportsmanship during the Indian Premier League (IPL) 2020 match against Delhi Capitals (DC). Dhoni put on-field rivalry aside to assist DC opener Prithvi Shaw who seemed to be struggling with an eye issue. The veteran can be seen attempting to help the young cricketer, in a picture which has been shared by the Chennai-based franchise's Twitter handle. "coz it's more than just a game! #EnnamaKannuSowkyama #WhistlePodu #WhistleFromHome #Yellove #CSKvsDC," CSK captioned the photo.

Here are some of the reactions from the fans:

Mahi you are Great

CSK suffered a consecutive defeat in the IPL against DC, with the latter emerging victorious by a margin of 44 runs. The Chennai-based franchise was restricted to 131/7 after being set a target of 176. South African pacers Kagiso Rabada and Anrich Nortje were the key performers with the ball for Delhi Capitals, accounting for three and two wickets, respectively.

Shaw was the highest run-scorer for DC smashing 64 runs off 43 deliveries in an innings comprising of nine boundaries and a six. Shikhar Dhawan and Rishabh Pant also made important contributions, helping DC reach 175/3 after being sent into bat by CSK.

The Delhi-based franchise remains unbeaten in IPL 2020, following this triumph, having recorded a Super Over win in their opener against Kings XI Punjab (KXIP). CSK will be optimistic of a return to fitness for batsman Ambati Rayadu, who was a clinical performer during the side's sole win against defending champions Mumbai Indians in the IPL 2020 opener.

MS Dhoni Prithvi Shaw Cricket
Get the latest updates on IPL 2021, IPL Points Table , IPL Schedule 2021 , live score . Like us on Facebook or follow us on Twitter for more sports updates. You can also download the NDTV Cricket app for Android or iOS.