RR vs KXIP: There were congratulations and awards for the victorious Rajasthan Royals after they pulled off the highest successful chase in IPL history against Kings XI Punjab. 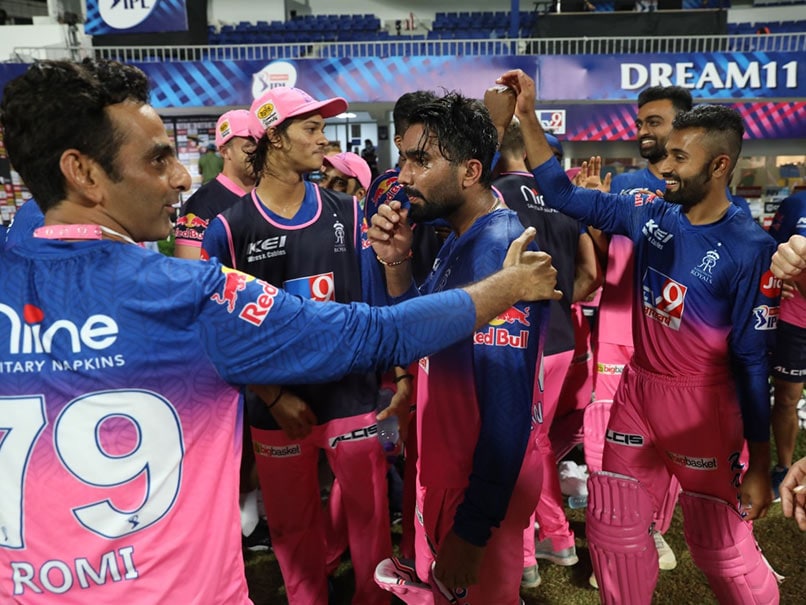 Things were jovial in the Rajasthan Royals (RR) dressing room after they pulled off the highest successful chase in the history of Indian Premier League (IPL) on Sunday, decimating Kings XI Punjab's 223/2 to win their second successive match in IPL 2020. Captain Steve Smith led the celebration by congratulating the players on a "great win" and "keeping the belief throughout" the chase even in a high-pressure situation. “Great win lads. Chasing 223 (is a) sensational effort. (We) Always kept the belief throughout,” Smith said in the team dressing room after the match. RR uploaded a video on social media and shared with the fans the celebrations in the dressing room after a stunning win.

Straight from the dressing room, into your hearts.

Man of the Match, Sanju Samson's 85 off just 42 balls played a big role in RR's win even though it was Rahul Tewatia's sensational six-hitting that stole the show towards the end.

“Sanju, again, that was an incredible innings, mate,” Smith said, before turning his attention to Tewatia, who, despite being 17 off 23 at one stage, stuck it out and finished with a match-winning 53 that saw him hit six sixes in eight balls.

“(Rahul) Tewatia, obviously after a bit of a shaky start… (laughter) great work for keeping the belief, staying in there and sticking it out and getting the boys home. You should win the game change award for sure,” Smith said.

Coach Andrew McDonald was quick to point out Smith's contribution as well. The skipper smashed 50 off just 27 balls and shared an 81-run stand with Samson.

“Smudgy's innings as well… Obviously he is not going to go out there and talk about himself, about how important that partnership was with Sanju (Samson) at the start,” McDonald quipped.

Jofra Archer's cameo of 13 off three balls including two sixes decisively swung the match in RR's favour towards the end of the second innings.

“We need some sort of foundation. We need people chipping in everywhere and Jofra, from ball one, when the game is in the balance… he is making a habit of it,” McDonald congratulated Archer.

McDonald added: “It always takes a collective (effort). It is a (game of) small moments and small margins and I am going to back Smudge on it – when we are bowling first in those situations every ball counts.

“You never know what the hell is going to happen. When you are on the top of your mark, make sure you are on and don't drop your bundle.

“I thought we did that and we came back strongly which then gave us a little sniff and that's what we need in this game.”

Tewatia, the hero, was given the opportunity to award the Pagadi– a custom in the dressing room to award a traditional Rajasthani headgear to a key performer in the match. The choice was obvious.

“There were a lot of performances tonight, especially from the bowlers – Ankit Rajpoot especially in his first game. And TC (Tom Curran). So it was hard for the bowlers to bowl at the death in that situation, but the Pagadigoes to Sanju Samson for an incredible innings,” said Tewatia.

However, Samson was aware of the role of the bowlers, who had a torrid day on a flat Sharjah deck. Ankit Rajpoot, playing his first match for RR, was the most economical of all bowlers as he returned 1/39 from four overs.

“I would like to pass on the Pagadito Ankit Rajpoot,” said Samson before jumping over to Rajpoot's corner and passing him the honour.

Jofra Archer IPL 2020 Rajasthan Royals vs Kings XI Punjab, Match 9 Cricket
Get the latest updates on ICC Women's Cricket World Cup 2022 and IPL 2022, check out the Schedule , Live Score and IPL Points Table. Like us on Facebook or follow us on Twitter for more sports updates. You can also download the NDTV Cricket app for Android or iOS.