IPL 2020, MI vs RCB: Mumbai Indians are on top of the IPL 2020 Points Table, but one bad match against Royal Challengers Bangalore can push them off that pedestal. 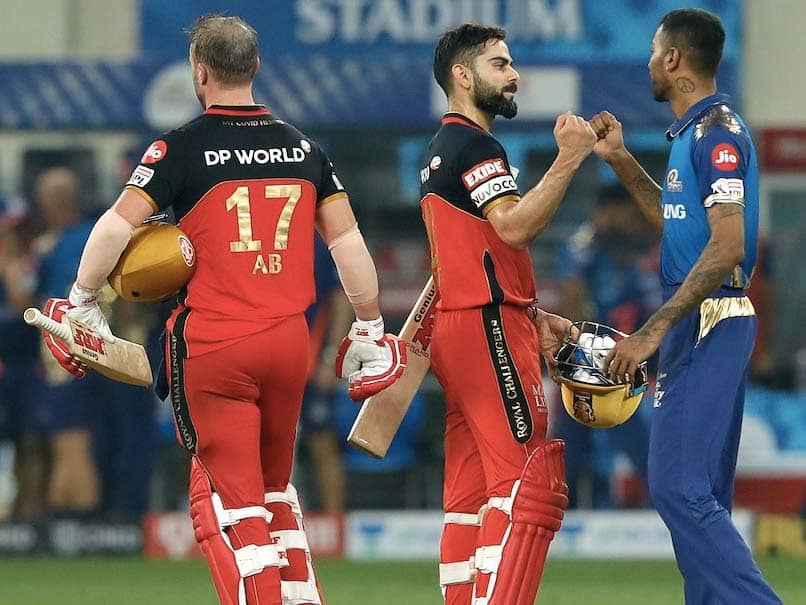 MI vs RCB: Both teams have the equal number of points, only separated by net run-rate.© BCCI/IPL

Mumbai Indians and Royal Challengers Bangalore, who meet in Abu Dhabi on Wednesday, along with Delhi Capitals, are in a similar situation. They are all on 14 points from 11 matches apiece, with the 7-4 win-loss equation. Another point of similarity is that they have all lost their last matches. MI were made to look ordinary by Rajasthan Royals, who saw Ben Stokes and Sanju Samson run down a 196-run target with ease. RCB too tripped up, losing to Chennai Super Kings, who are out of the running, but as was evident, can still cost the top teams some points.

So, the MI-RCB contest on Wednesday will be crucial. Plus, there will be the added needle of Mumbai Indians skipper Rohit Sharma being left out of all the squads for India's series in Australia, so meeting up with Team India skipper Virat Kohli's RCB will have the undercurrents, making the contest that much more of a challenge.

On sheer form, Mumbai Indians look way better. They have been among the runs almost always, with Rohit Sharma, Ishan Kishan, Suryakumar Yadav and an array of middle-order marauders in Kieron Pollard, Hardik and Krunal Pandya adding massive numbers.

The bowling, led by Trent Boult and Jasprit Bumrah, has been efficient, barring odd occasions like the RR game. They look the complete package.

The RCB batting is nowhere as consistent. Kohli and AB de Villiers are always expected to get runs, batting first or chasing, and even when they do, the rate is not always rocking, as was evident against CSK.

The bowling, which now includes, apart from Chris Morris, the Indian Test team candidates Navdeep Saini and Mohammad Siraj, along with added India players in Yuzvendra Chahal and Washington Sundar, does not always do enough.

In essence, RCB look good, but MI look near-perfect. While the winning momentum for both has taken a bit of a hit, they as teams can beat anyone on their day.

Only that Mumbai Indians are more in the habit of winning. Plus, they have points to prove and win.

Virat Kohli IPL 2020 Mumbai Indians vs Royal Challengers Bangalore, Match 48 Cricket
Get the latest updates on IPL 2020, check out the IPL Schedule for 2020 and Indian Premier League (IPL) Cricket live score . Like us on Facebook or follow us on Twitter for more sports updates. You can also download the NDTV Cricket app for Android or iOS.