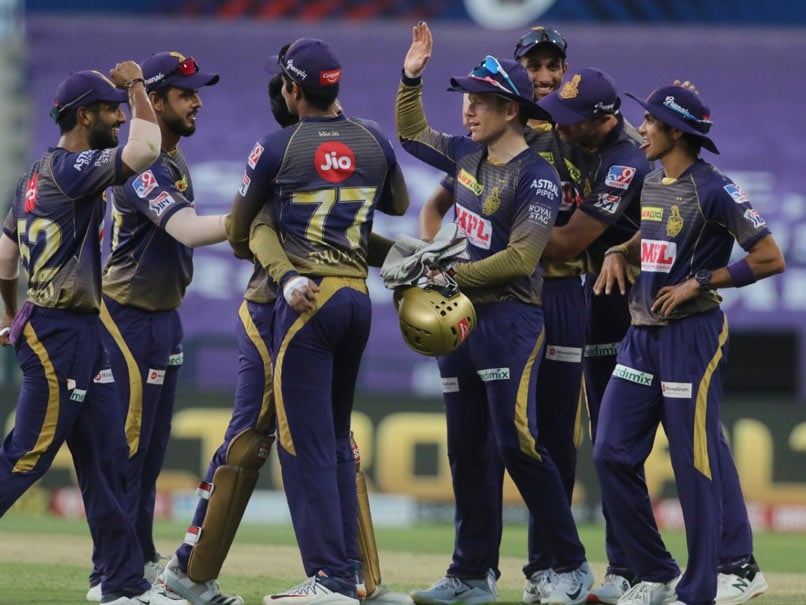 IPL 2020: KKR registered their fourth win in this season as they beat KXIP by 2 runs.© BCCI/IPL

Kolkata Knight Riderspulled off a thrilling two-run win over Kings XI Punjab at the Sheikh Zayed Stadium in Abu Dhabi on Saturday as Kings XI Punjab (KXIP) batting suffered a mini collapse towards the backend of their innings. KXIP needed 29 runs off the last four overs and with KL Rahul and Nicholas Pooran out in the middle it looked easy for the batting side to chase it down but a disciplined bowling and some poor shot selection from the batsman led to their fifth consecutive loss in the ongoing tournament. Prasidh Krishna took three for 29 from his quota of four overs as KKR stole victory from the jaws of defeat. With seven runs needed off the last delivery, Glenn Maxwell smashed the ball over covers but it landed just inside the boundary ropes and gave KKR a close victory.

Earlier in the day, KKR skipper Dinesh Karthik won the toss and opted to bat.

KKR got off to a poor start losing the wickets of Rahul Tripathi and Nitish Rana inside the powerplay.

Eoin Morgan tried to steady the ship with Shubman Gill but he was outfoxed by Ravi Bishnoi. Morgan scored 24 runs off 23 balls.

Shubman Gill notched up a gritty half-century before he was run out in the 18th over. He made 57 runs.

Karthik, coming in to bat at 5, scored a quick-fire knock of 58 to help KKR post a competitive total of 164 for six from their quota of 20 overs.

In reply, Mayank Agarwal and KL Rahul provided the best possible start for KXIP as the duo put on 115-run stand for the opening wicket. Agarwal was out caught on the boundary off Krishna.

Nicholas Pooran then joined Rahul out in the middle and they were cruising in the chase before a false shot from the West Indies batsman brought his downfall.

Punjab lost three more wickets in the last two overs as they fell short of the target by just two runs.

KL Rahul Prasidh Krishna IPL 2020 Kings XI Punjab vs Kolkata Knight Riders, Match 24 Cricket
Get the latest updates on ICC T20 Worldcup 2022 and CWG 2022 check out the Schedule, Live Score and Medals Tally. Like us on Facebook or follow us on Twitter for more sports updates. You can also download the NDTV Cricket app for Android or iOS.