IPL 2020, RR vs KXIP: Rahul Tewatia hit 36 from the last 8 balls he faced as a six-storm at the death helped RR pull off the highest chase in IPL history. 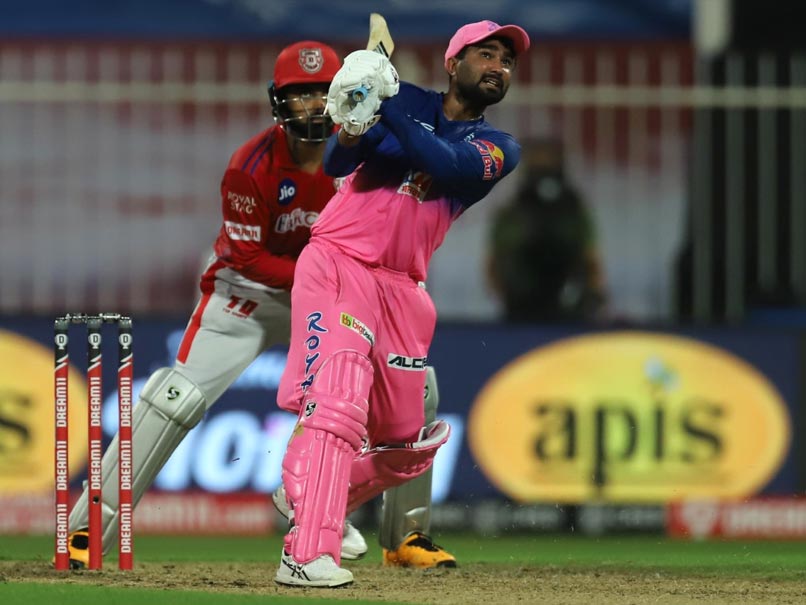 Some sensational six-hitting from Rajasthan Royals (RR) and Kings XI Punjab (KXIP) contributed to the highest successful chase in the history of Indian Premier League (IPL) as RR decimated KXIP's 223/2 courtesy a heel-turn by Rahul Tewatia. The left-hander who was in the team more for his leg spin than any prowess with the willow was 17 off 23 balls at the end of the 17th over and playing into the hands of KXIP. However, he switched gears dramatically to smash six sixes in the next two overs and 36 off the last eight balls he faced. The result was RR finishing 226/6 with three balls to spare – the highest chase in IPL bettering RR's own record of 215 against Deccan Chargers in 2008.

Sheldon Cottrell was hammered for sixes on the first four balls and then on the final ball of the 18th over by Tewatia as a 30-run over turned the game on its head, changing the equation from 51 off 18 to 21 off 12.

Jofra Archer resumed from where he had left the field the last time he batted at Sharjah and smashed Shami for two sixes in the 19th to all but seal the match for RR.

Although Tewatia was eventually dismissed for 53 off 31 balls in the penultimate over and Riyan Parag was bowled by Murugan Ashwin in the final over, with just two needed off the last six balls it was really a walk in the park for RR.

Tewatia was promoted ahead of Robin Uthappa to No. 4 in the batting line-up after captain Steve Smith was dismissed for a breezy 50 off just 27 balls.

With the asking rate shooting up to 14 an over, Samson decided to take risks and hit Glenn Maxwell for three sixes in the 16th over.

However, Mohammed Shami returned and got Samson caught behind for 85 off 42 and that seemed to be the match for KXIP.

Tewatia, though, had other plans, as he seemed to have flipped a switch with the dismissal of Samson and went on a rampage smashing 36 off the next eight balls he faced.

Tewatia's dramatic change of heart somewhat overshadowed Mayank Agarwal's maiden IPL hundred. Agarwal batted out of his skin, scoring 106 off just 50 balls with 10 fours and 7 sixes, and was well-accompanied by skipper KL Rahul, who hit 69 off 54.

The duo shared a 183-run opening stand and laid the platform for a high-scoring match on the flattest of decks in Sharjah.

Maxwell remained unbeaten on 13 off 9 and Nicholas Pooran, who pulled off a spectacular save on the boundary by parrying a ball that was certain to land beyond the rope into the field of play while himself being airborne, hit 25 off 8 with three sixes.

Pooran's effort created waves on social media with commentators and experts singing paeans to the Caribbean's effort, but it was of little consolation in the end as sixes that were beyond Pooran's or anybody's reach and landed in the empty stands of Sharjah or in the streets beyond.

The bowlers on both sides had a day to forget as Shami returned 3/53 in four overs and Cottrell got 1/52 in three. For RR, Ankit Rajpoot and Tom Curran got a wicket each.

Steven Smith IPL 2020 Rajasthan Royals vs Kings XI Punjab, Match 9 Cricket
Get the latest updates on Fifa Worldcup 2022 and check out  Fifa World Cup Schedule, Stats and Live Cricket Score. Like us on Facebook or follow us on Twitter for more sports updates. You can also download the NDTV Cricket app for Android or iOS.