IPL 2020, CSK vs RR: Jos Buttler posed with MS Dhoni's CSK Jersey after scoring a match-winning 70 not out in Abu Dhabi on Monday. 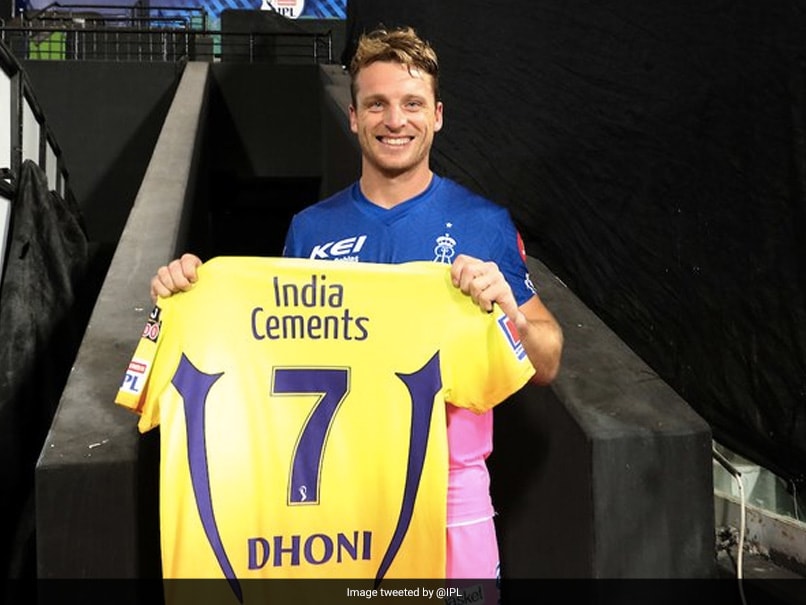 Jos Buttler, Rajasthan Royals batsman, scored an unbeaten half-century against Chennai Super Kingsto help his side secure crucial two points on Monday. For his heroics with the bat (70 not out), Buttler was adjudged player of the match at the Sheikh Zayed Stadium in Abu Dhabi. After the win, Buttler was spotted posing with a "prized possession" he got from former India captain MS Dhoni. The prized possession was MS Dhoni's CSK jersey. Indian Premier League's official Twitter handle posted a picture of the Englishman posing with the CSK jersey after RR's seven-wicket wicket win that saw them move up to fifth place on the points table. "Buttler all smiles with a prized possession," IPL's official handle captioned the picture on Twitter.

In the match, CSK won the toss and opted to bat. The decision backfired as Jofra Archer sent back the in-form Faf du Plessis in the third over.

Shane Watson hit a couple of boundaries off Kartik Tyagi in the next over but was dismissed on the third ball that he faced.

Sam Curran and Ambati Rayudu steadied the ship for CSK, but they couldn't capitalise on the start they both got.

Curran fell for 22 while Rayudu top-edged a sweep shot off Rahul Tewatia. He scored 13 runs from 19 deliveries.

MS Dhoni, playing his 200th IPL match, scored a run-a-ball 28. It was once again the late flourish from Ravindra Jadeja that took CSK to a respectable total of 125/5 at the end of 20 overs.

Deepak Chahar and Josh Hazlewood picked up early wickets and had Rajasthan reeling at three for 28 at one stage but Steve Smith and Jos Buttler weathered the storm and put on an unbeaten 98-run stand to steer their team home.

Jos Buttler Chennai Super Kings vs Rajasthan Royals, Match 37 Cricket IPL 2020
Get the latest updates on ICC T20 Worldcup 2022, check out the Schedule and Live Score. Like us on Facebook or follow us on Twitter for more sports updates. You can also download the NDTV Cricket app for Android or iOS.