Venugopal keen to hit back after being laid low by dengue

The recovery for a sportsman after losing 15 kgs is not easy and Venugopal Rao, who briefly played for India during 2005-06, would tell you that regaining strength was of paramount importance before the start of IPL. 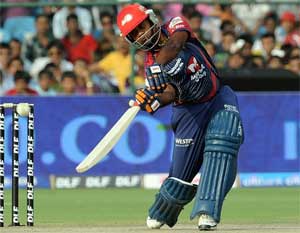 The recovery for a sportsman after losing 15 kgs is not easy and Venugopal Rao, who briefly played for India during 2005-06, would tell you that regaining strength was of paramount importance before the start of IPL.

"For two and a half months, I was down with dengue fever which led to me losing almost 15 kgs. But after the rehabilitation and playing few matches in first class cricket, I am all fit and ready to play," the Andhra batsman told mediapersons during an interaction.

Someone who has never been a slam bang player, Venu says he prefers playing "basic cricketing shots" rather than being "innovative".

The 28-year-old has seen the highs and lows associated with IPL during his time with the Deccan Chargers and hopes that his team, Delhi Daredevils will do a similar kind of turnaround this season.

"The last season was surely a low point for us but this season we are looking at nothing less than the top position. During my first season with Deccan Chargers, we ended up at last place but the next season we were the IPL champions that is the kind of turn-around I am looking forward to," he said.

Ask him about coach Eric Simmons' presence in the dug-out, Venu says his positive vibes act like a confidence-booster.

"Simons is someone from whom you always get positive vibes, that was the case last season with him being our bowling coach and it remains the same this season also. He always motivates all and makes us believe that we are the best and his support always gives us a confidence boost."

Venu feels that IPL is the right platform for new kids to learn about top flight cricket.

"The new players in our squad are all keen to perform and prove their worth. For them IPL is the best way to learn from the best in the squad," he said.

Comments
Topics mentioned in this article
Indian Premier League 2012 Venugopal Rao Cricket Delhi Daredevils
Get the latest Cricket news, check out the India cricket schedule, Cricket live score . Like us on Facebook or follow us on Twitter for more sports updates. You can also download the NDTV Cricket app for Android or iOS.