Assam would have felt they had a chance to get back in the match when Gautam Gambhir (5) fell cheaply, too eager to dominate the bowling from the outset and holing out as a result. With two selectors in Vikram Rathour and Saba Karim watching the proceedings, Gambhir wouldn't have been happy with his effort. 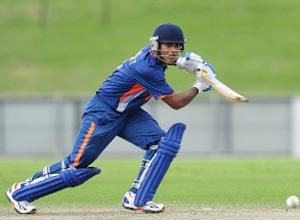 There's something about big finals that seem to bring out the best in Unmukt Chand. He's hit centuries in the finals of the Under-19 World Cup and Under-19 Asia Cup in the past, and on Sunday (March 3), the record extended into senior cricket as well. Chand's outstanding 116 in 133 balls was the cornerstone of Delhi's 75-run thrashing of Assam, as they won the Vijay Hazare Trophy 2012-13.

Put in to bat at the Dr YSR Reddy ACA-VDCA Stadium in Visakhapatnam, Delhi amassed 290 for 9, and on a pitch that hasn't seen too many big scores in the earlier knockout games, it was always going to be a big challenge for Assam. Their chase eventually ended at 215 all out in 44.2 overs, with Dheeraj Jadhav - 87 in 114 balls - the only one to get a sizeable score.

Chand's century came after what had been a relatively quiet tournament for him, but as he has done so often in the past, he hit the high notes on the big stage. He first got his eye in, and then played a succession of pleasing strokes all around the wicket, and no bowler appeared to trouble him.

Assam had won the toss and done the logical thing in putting Delhi in to bat, but they wouldn't have bargained for the onslaught that followed. Delhi had a new opening combination in Punit Bisht and Chand, with Dhruv Shorey ruled out with an injury suffered during a fielding drill on the morning of the match, and Bisht played his role to a nicety, playing aggressively and raising his half-century in just 59 balls. He fell soon after though, when an almighty heave off Gokul Sharma landed safely in the hands of Arup Das at the midwicket boundary. But Bisht had done his job in a 97-run stand, achieved in 20.5 overs.

Assam would have felt they had a chance to get back in the match when Gautam Gambhir (5) fell cheaply, too eager to dominate the bowling from the outset and holing out as a result. With two selectors in Vikram Rathour and Saba Karim watching the proceedings, Gambhir wouldn't have been happy with his effort.

However, after that, the Assam bowlers were put to the sword in a 115-run stand in just 100 balls for the third wicket between Chand and Jagrit Anand. Chand had played himself in, and opened up beautifully, while Anand was aggressive from the start. The stand included two stunning hits by Chand, when he first took on Abu Nechim Ahmed, the Assam captain and strike bowler, when he came back for a second spell, and smashed Arup Das in the next over - both hits clearing the fence by some distance.

Chand then cut Arup fiercely past the point fielder to bring up his hundred, getting there in just 115 balls. His second 50 had taken only 40 deliveries, a period in which he hit three sixes and two fours.

After Anand fell for his 50-ball 48, the lower-order didn't stick around for long, but swung their bats well enough to pile on the runs.

Assam's reply started brightly enough but soon fizzled out with the asking rate too high to keep up with. The quality of Delhi's bowling was also significantly higher than Assam's, and wickets fell at regular intervals.

Assam lost their first wicket in Pritam Debnath to a combination of casualness on his part and brilliance from Varun Sood, who dived full length at the third man boundary and fired in an accurate throw to catch an ambling Debnath short of his crease.

When Shib Shankar Roy then fell to Parvinder Awana in the seventh over, the chase lost considerable steam with only Jadhav showing the skill necessary to battle it out. But even he could do little on his own, and the only time he got any support was when Nechim, the No. 9 batsman, went for his shots in an entertaining 53-run stand off 43 balls.

When that stand was broken, the end came swiftly, with the last three Assam batsmen falling within six balls.

The win gave Delhi their first significant domestic trophy since the Ranji Trophy triumph in 2007-08 and the whoops that greeted the final wicket showed how much the win meant to the players. And as the only side to go through the tournament unbeaten, their win couldn't have been more deserved.