'The God retires': Tributes pour in for Sachin Tendulkar

The announcement by the 40-year-old batsman, who is the highest run-scorer in the history of Test cricket, was given blanket coverage by Indian TV networks and news websites. 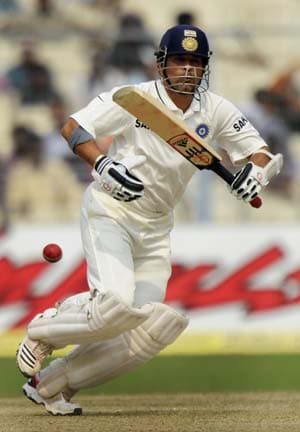 Tributes poured in Thursday from fans, players and experts after Sachin Tendulkar announced his retirement from Test cricket next month after a 24-year career.

The announcement by the 40-year-old batsman, who is the highest run-scorer in the history of Test cricket, was given blanket coverage by Indian TV networks and news websites.

The reactions were tinged with sadness but most acknowledged that it had been inevitable and came at a time when his reflexes were clearly showing signs of slowing down.

"One of the greatest ever is retiring. One of my heroes and a absolute joy to play against," wrote former England captain Michael Vaughan on Twitter.

Kevin Pietersen wrote that the right-hander was the "undisputed champion of cricket".

The father of two, the only player to make 100 centuries in international cricket, will hang up his boots after a home series against the West Indies in November which will see him complete 200 Tests.

"This is the hardest call to make when you have played cricket for 24 years. This decision is entirely his own and it gives us an opportunity to celebrate Tendulkar in the years to come," said cricket historian and author Boria Majumdar.

"There will be an overflow of emotions when he takes the field for his final Test," Majumdar told AFP.

The Indian Express newspaper conceded that Tendulkar had not been at his best in the recent past. But it greeted news of the announcement with a picture captioned "The God retires".

Sourav Ganguly, a former India captain, told the NDTV news channel that Tendulkar's "commitment to the game and his temperament stood out".

"He is India's biggest cricket asset and I am sure he will be involved with the game in future," said Ganguly.

"You knew it was coming, it was inevitable, then why Sachin do you still produce this numbness?" he wrote on Twitter.

Comments
Topics mentioned in this article
Cricket Michael Clarke Michael Vaughan Sourav Ganguly Kevin Pietersen Sachin Ramesh Tendulkar Indian Premier League 2012 England Cricket Team
Get the latest updates on IPL Auction 2023 and check out  IPL 2023 and Live Cricket Score. Like us on Facebook or follow us on Twitter for more sports updates. You can also download the NDTV Cricket app for Android or iOS.