The Jaipur-based IPL side has added Harmeet Singh, Sachin Baby, Sanju Samson and Rahul Shukla to their squad. 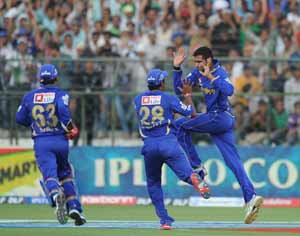 Kerala's 18-year-old wicket-keeper Samson has been representing his state team since his Ranji debut in 2011 against Vidarbha.

The budding U-19 Asia Cup star hit two centuries in the Ranji Trophy last season and attended the Rajasthan Royals selection trials on January 27, 28 & 29th. The right-handed Samson was recently appointed vice-captain of the Kerala team for the Vijay Hazare Trophy.

Baby has been a consistent performer for Kerala in the last few years and was among the top run-scorers in the invitational Buchi Babu Tournament and Vijay Hazare Trophy for his state.

Rajasthan Royals captain Rahul Dravid said, "The IPL has been an excellent platform for encouraging the growth of fresh talent in our country. These four confident players will provide more depth and variation to our team during IPL 2013."