After posting 214/7, all the Indian bowlers had to do was put the ball in the right areas and hope their fielders held their catches. India A did this in some style. 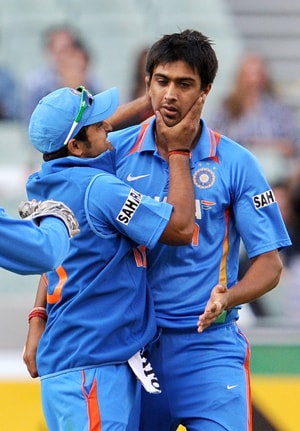 In helpful conditions, bowlers can be a major force even in the shortest version of the game. But on a good batting surface, the best ally for a team trying to defend a total is the pressure of the scoreboard. Once India A's batsmen had romped to 214 in their 20 overs - it hardly mattered that they suffered a collapse from 189 for 3 to 189 for 7 when Andre Russell took four wickets in as many balls - all the bowlers had to do is put the ball in the right areas and hope their fielders held their catches. India A did this in some style, routing West Indies A by 93 runs in front a raucous Saturday (September 21) crowd at M Chinnaswamy Stadium in Bangalore.

When two batsmen fire, the game can get away from you very quickly when the innings is limited to only 20 overs. In India A's case, there were four meaty contributors, the first of whom, Unmukt Chand, benefited not merely from wayward bowling but depressing catching. Dropped on 22 and 42, Chand (47) did not pay the price even when his shot selection was far from ideal.

Robin Uthappa, the other opener, occasionally felt for the ball outside off when he tried to punch through cover without getting across his stumps, but had no such problems through the on side. Ronsford Beaton, likened to Curtly Ambrose by Yuvraj Singh, extracted bounce, getting the ball to climb into Uthappa's rib cage, but the batsman was quick to move to the off side and shovel the ball for six over backward square-leg. Uthappa added a magnificent pull and a brutal hoick and three sixes had him rushing off the blocks.

The opening stand of 74 was broken when Veerasammy Permaul caught Uthappa (35) in front of the stumps.

B Aparajith came and went, courtesy a chip to short midwicket, and then Yuvraj joined forces with Kedar Jadhav for an 80-run partnership that sealed the deal. Yuvraj began slowly, playing watchfully against the offspin of Ashley Nurse, who got the ball to grip the surface and turn appreciably away from the left-hand batsman.

The introduction of legspin, in the form of Nkrumah Bonner, seemed to flip a switch in Jadhav, who attacked mercilessly, dancing down the pitch to smack the first ball from the new bowler for a straight boundary. A carve over cover for four ended Bonner's first over and when Kieran Powell, the West Indies A captain, kept the bowler on for a second, Jadhav did not hold back. Consecutive sixes, one of which disappeared straight back over the bowler's head an kept climbing till it came back down to earth deep into the stand above the sightscreen, ensured that the legspin experiment ended with figures of 2-0-29-0 for Bonner.

When Jadhav fell, attempting one big shot too many, he had more than done his job, racking up 42 off only 21 balls. Yuvraj then laid into the bowling in his inimitable fashion, marrying timeless grace with recently regained power. Yuvraj's bat described a graceful arc as he sent the ball high, wide and handsome to end on 52 from only 35 balls.

In the midst of the carnage, almost unnoticed, Russell picked up wickets off the first four balls of the 19th over. With batsmen holing out at the death trying to push an already bloated scoring rate up, Russell's feat was statistically relevant, but did little to change the course of the game as India A ended on 214 for 7.

Walking out to bat needing to score at more than ten runs an over for the course of their innings, the West Indies A batsmen came out swinging. Unfortunately for them, for every two occasions when the meat of the bat made clean contact, one miscue ensued. Each time the ball went up in the air, an India A fielder settled under it, the best of which came when Chand ran back at cover and threw himself full length to take a smart catch.

West Indies A lost wickets at regular intervals, with the score on 21, 49, 55, 62 and 65. Although their line-up is stacked with players who can contribute with the bat, the rising required run-rate ensured that the chase was dead in the water before it could get going in right earnest. West Indies A did not even play out their overs, with the last wicket falling in the 17th over with only 121 on the board. Rahul Sharma was the chief beneficiary, ending with the flattering figures of 5 for 21.