Their campaign stuttering due to continuous batting failures, Mumbai Indians would hope that Sachin Tendulkar comes back and inspires a turnaround when they take on a struggling Kings XI Punjab in the Indian Premier League match. 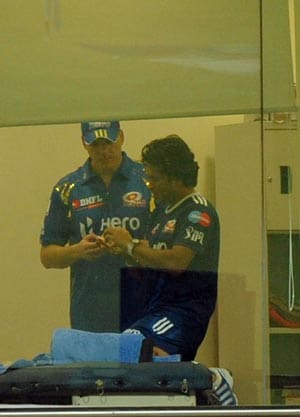 Their campaign stuttering due to continuous batting failures, Mumbai Indians would hope that Sachin Tendulkar comes back and inspires a turnaround when they take on a struggling Kings XI Punjab in the Indian Premier League match.

The home team is hoping that Tendulkar, who has seen the action only from the sidelines after getting hit on his finger in the opening game on April 4, returns to the opening slot and gives the top order a much-needed dose of stability.

Mumbai Indians paid the price of reckless batting against Delhi Daredevils as they managed just 92 runs, their second-lowest total in five seasons, to lose their last match comprehensively.

The Mumbai Indians' batsmen have to get their act together against a visiting side that itself is placed at the bottom of the points table.

Tendulkar has started practising hard after missing the last four games and his presence, if it comes about, would certainly calm down the jangled nerves of the top order.

Key MI batsmen Rohit Sharma, Kieron Pollard and Ambati Rayudu and Richard Levi, have all been inconsistent while wicket-keeper Dinesh Karthik has been a total failure.

The additional worry for MI is that paceman Lasith Malinga is unlikely to take the field for the second match in succession because of pain in his back.

Whenever MI were in trouble, the team had lobbed the ball to the Sri Lankan sling-arm bowler and he had delivered.

In his absence, the team fielded Australian Clint Mckay without much success against the Daredevils, but the target for the visitors was too small for the bowlers to make any impression.

Munaf Patel has bowled extremely well and is, in fact, the highest wicket taker (10 in four games) for MI this season and he is expected to have Rudra Pratap Singh as back-up in pace for the second game running.

Skipper Harbhajan Singh, strangely, did not bowl at all in the previous game against Delhi and gave the excuse that he wanted to give a chance to other bowlers, who missed out in previous games.

Harbhajan himself has failed to make an impression, having just one wicket to his credit in five games, and the team would look for a bigger contribution from him.

Australian Mitchell Johnson is expected to join the team but is unlikely to be considered for the match.

The visitors have an equally important task of getting their campaign back on the rails after suffering their fourth defeat in six games to the Royal Challengers Bangalore at Mohali last night.

Though Punjab, whose batting has also not clicked in a big way so far, piled on their biggest score (163) of the season, they still ended up losing after getting a few early wickets through Parwinder Awana.

Captain Adam Gilchrist was absent due to hamstring injury and is set to miss tomorrow's game too.

It was an big blow to Punjab's campaign as the former Australia keeper had just got among the runs when he made 40 against KKR, and in his absence David Hussey led the side.

The bright spot for Punjab is the fact that Azhar Mahmood, the former Pakistan player but now an England player, was able to join his team after visa-related issues delayed his arrival.

He immediately contributed with the bat in making a quick-fire 33 off 14 balls against Bangalore which aided the team to post their highest score of the season.

Overall, the Punjab batting has not really lived up to the mark and the visitors would be eager to put behind the two back-to-back defeats at home.

Paul Valthaty, the Mumbai-born opener who was a sensation in IPL-4, has been the biggest flop of this season. As compared to the phenomenal 463 runs he had scored in the last season, he has mustered only 34 in six games.

Shaun Marsh, the Australian left hander, too has been in poor form as compared to last year when he amassed over 500 runs at 42.00 per innings. He has only 157 runs to his credit so far.

Also the fact that Punjab would be playing their third game in five daysÂ  and that too awayÂ  must be to their disadvantage even as MI have remained at home since April 10 and would have had a five-day rest before Sunday's game.

Much would depend on how well Punjab players recover from playing last night and then travelling to Mumbai on Saturday.

The team has depended mostly on Dmitri Mascarenhas, who was given a break with Azhar available in the previous game, Praveen Kumar, Manmeet Singh and leg spinner Piyush Chawla in the bowling departmentÂ  on paper not a formidable attack by any means.

Punjab would need to take early wickets against MI to fancy their chances of halting the losing streak.

The two teams would line up after two days at Mohali to have another go at each other.