It does not augur well for any side making excuses but that's what India is doing right now. "The dew really does change the course of the game but we didn't start very well, we were a fraction short. There was something there for the fast bowlers but they were cut and pulled early on," MS Dhoni said at the post-match presentation at the Wankhede stadium here. 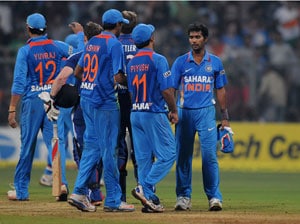 India captain Mahendra Singh Dhoni on Saturday criticised his inexperienced pacers Ashok Dinda and Parvinder Awana for giving away too many runs, but said the duo needs to be backed as they are good future prospects.

Defending 177 for eight, India witnessed a awful start before Yuvraj Singh's (3/17) heroics with the ball took the second Twenty20 International against England to the wire.

But eventually it was not to be India's day as captain Eoin Morgan produced a scintillating 26-ball 49-run unbeaten knock to hand England a thrilling six wicket win to level the two-match series 1-1.

"The dew really does change the course of the game but we didn't start very well, we were a fraction short. There was something there for the fast bowlers but they were cut and pulled early on," Dhoni said at the post-match presentation at the Wankhede stadium here.

"We came back well but couldn't keep it going. We could have got another 10-12 runs at the end of our innings too but overall is was a good performance. The fast bowlers are still a bit raw but they got good experience and exposure to international cricket. They are good prospects for us but we need to back them," he added.

Morgan, who snatched the win for England with a six off the last ball, said with a great Twenty20 pitch on offer the visitors had backed themselves to chase down the target set by India.

"It was a hell of a game of cricket, a fantastic match and a great pitch for a game of Twenty20. The stats suggest, particularly at this stadium, that the chasing side usually wins and we backed ourselves to do that," he said. Morgan also lauded his side's fielding effort in the match.

"It was a good job because we nearly fell short. Fielding was outstanding, we try to save 10-15 runs each time and today we were amazing," said Morgan, who was adjudged man-of-the-match for his match-winning knock.

Man-of-the-series Yuvraj Singh, who scalped six wickets in two matches, was pleased with his performances in the rubber.

"I tried to do it for the team, bowl a few overs, vary my pace and try to confuse them. It's tough to bowl with the dew, the ball comes quicker on to the bat and runs away.

"I've been batting well, hitting the ball well, so that's good for me," he said.