Put in to bat, Guyana could make only 128 for 5, which Jamaica chased down with 15 balls to spare, driven by an unbroken 62-run stand for the fourth wicket between Chris Gayle and Andre Russell. 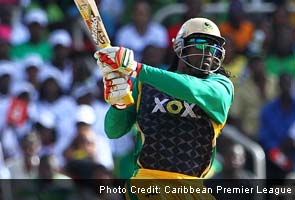 Jamaica Tallawahs became the inaugural Caribbean Premier League champions, beating Guyana Amazon Warriors by seven wickets in the final of the Twenty20 league at the Queen's Park Oval in Port of Spain on Saturday (August 24).

At the start of Jamaica's chase, Chadwick Walton perished early, caught plumb in front off Tillakaratne Dilshan in the fourth over, leaving Jamaica 26 for 1. Sunil Narine kept Gayle and Kumar Sangakkara quiet, and Christopher Barnwell provided the crucial breakthrough when James Franklin took a smart low diving catch at midwicket to send Sangakkara back. Lasith Malinga deceived Jermaine Blackwood, who scooped an easy return catch, leaving Jamaica 67 for 3 in 11.5 overs.

With the game tantalisingly poised, Ramnaresh Sarwan, Guyana's captain, gambled by bringing Barnwell back into the attack. Gayle and Andre Russell, the highest six-hitter of the tournament, seized the opportunity by taking 20 runs and with it, effectively sealed the issue.

Whycliffe 'Dave' Cameron, the West Indies Cricket Board president, said the objectives of the tournament had been met, and expressed pleasure with how it had been received.

"The support (for the tournament) by the West Indian fans has been overwhelming and this is evidenced by the sold out crowds at each and every match so far," said Cameron. "The combination of some of the best regional and international T20 players with the amazing carnival, party-like atmosphere for which the Caribbean is renowned has turned the eyes and ears of the world to our shores, and we could not be more pleased about that exposure".

Earlier in the evening, David Bernard and Vernon Philander were miserly with the new ball for Jamaica, and that set the tempo of the game. Trying to up the ante and break the cluster of dot balls, Guyana lost wickets regularly.

William Perkins, after having hit the first six of the match, popped an easy catch to Danza Hyatt at mid-on off Bernard. Bernard then justified Gayle's decision to bowl him out in one stretch by castling Dilshan, the chief protagonist in Guyana's semifinal win, with a sharp inswinger off the first ball after the Power Play Overs.

At the midway mark, Guyana were 46 for 2, their lowest score after ten overs in the tournament. It fell upon Lendl Simmons and Denesh Ramdin, in front of a vociferous house full crowd that was backing Guyana, which fielded four Trinidadians, to resurrect the innings with a laboured 52-run stand.

Simmons, who ended as the second highest run-getter of the league, stroked a few clean hits to the fence but Muttiah Muralitharan, who conceded only 13 runs in his four overs, choked the flow of runs as Jamaica remained in charge of the proceedings. Nikita Miller had Simmons caught at long-off, and then Sunil Narine, sent as a pinch-hitter, was run out and soon after that Gayle bowled Ramdin for 29.

James Franklin, surprisingly held back in the batting order despite being the side's second best batsman, and Barnwell, clobbered Gayle, the costliest bowler of the innings, for 20 runs in the final over. However as it turned out, that was too little to spoil the celebrations of Gerard Butler, the Hollywood actor and equity owner of Jamaica, in the stands. But possibly, it did do just enough to get Gayle's aggression going.