It's a rusty start to our title defence: Dhoni

The Chennai Super Kings on Wednesday suffered a eight-wicket defeat to Mumbai Indians in the IPL 5 opener and skipper Mahendra Singh Dhoni admitted it was a "rusty" start to their title defence. 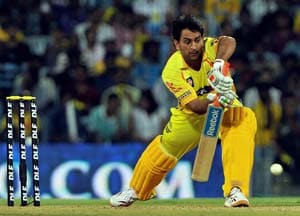 The Chennai Super Kings on Wednesday suffered a eight-wicket defeat to Mumbai Indians in the IPL 5 opener and skipper Mahendra Singh Dhoni admitted it was a "rusty" start to their title defence.

Chasing 113 to win, Mumbai Indians scored 115-2 with 19 balls to spare and Dhoni said another 30-odd runs could have made a difference on the pitch at the MA Chidambaram Stadium.

"It is not a typical Chennai wicket. We started well but we didn't do well in the last overs, so it was a rusty start for the tournament. We did well though with the bowling," Dhoni said after the match.

"I felt it was better to bat when we batted and there was something for fast bowlers as well later on but (Richard) Levi batted very well," Dhoni said.

His Mumbai counterpart, Harbhajan Singh, said it was a good toss to win as the wicket was very unpredictable.

"Well good game, it was a good toss to win, wicket was quite unpredictable, not the same wicket that we played earlier, all the boys played well and Levi played terrific," Harbhajan said.

Asked about their brilliant work on the field, Harbhajan said: "Fielding is a very important part of T20 cricket, one catch, one run out can make a difference, like we got Dhoni out, if he would have stayed then another 30-40 runs would have been difficult on this wicket."

Man-of-the-match Richard Levi, who scored a 35-ball 50 on IPL debut, said it was an unbelievable experience to open with iconic batsman Sachin Tendulkar.

"It came on nicely on to the bat. One or two bounced a lot. It was unbelievable [opening with Sachin]. He was very easy to talk to," he said.

Comments
Topics mentioned in this article
MS Dhoni Yuvraj Singh Suresh Raina Cricket Richard Levi Indian Premier League 2012
Get the latest updates on IPL Auction 2023 and check out  IPL 2023 and Live Cricket Score. Like us on Facebook or follow us on Twitter for more sports updates. You can also download the NDTV Cricket app for Android or iOS.