IPL is changing the face of world cricket: Pollock

Former South African fast bowler and captain Shaun Pollock feels the Indian Premier League has done a world of good for the game of cricket and it is turning out to be an excellent laboratory for batsmen and bowlers to innovate more and more. 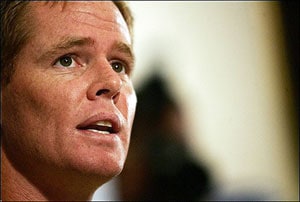 Former South African fast bowler and captain Shaun Pollock feels the Indian Premier League (IPL) has done a world of good for the game of cricket and it is turning out to be an excellent laboratory for batsmen and bowlers to innovate more and more.

Pollock, now a mentor with Mumbai Indians, says the IPL is a fantastic winning formula from whichever way one looks at it, be it the game, players, franchises or spectators.

"Cricket has moved ahead amazingly with the IPL, both financially as well as technically. Before the IPL, soccer players, golfers and tennis players were the envy of other sports persons. Now cricketers have joined the big-buck-earenrs," Pollock told IANS in an exclusive interview.

"The IPL is a platform for cricketers to experiment and try out new things. We have seen bowlers coming up with baffling deliveries and batsmen playing hitherto unknown breath-taking shots," he said.

The 38-year-old also said the IPL is also a cerebral exercise for players to exchange views on matters of cricket and to understanding different cultures.

"It has broken all barriers. The playing format may be the same as any form of international cricket, but the players from different backgrounds and cultures are mingling like one family. That has helped the players to share their experiences with others and gain immensely," he said.

Pollock said Mumbai Indians have benefited from their eclectic mix of players in the dressing room.

As the IPL moves towards its business end, Pollock hopes that Mumbai Indians, now placed third in the points table, can get to the play-off round and eventually go on to win the league.

"We have a strong team on paper but that doesn't mean much because cricket is a funny game. We have not done consistently well in both batting or bowling on a given day. But we have shown what we are capable of. Now is the time for the boys to play to their potential and peak," he said.

Pollock said Mumbai Indians, who were the favourites when the tournament began, have benefited a lot from their Champions League Twenty20 win last year.

"The CLT20 win helped us to believe that we can get over the line in any given situation. The win helped the team to handle pressure better," he said.

"These victories only boost your confidence and the belief in your abilities," he said.

On a lighter note he added: "It also helps the team in impressing the franchise owners."

Asked why Sachin Tendulkar, who relinquished his captaincy at the start of the season, hasn't performed consistently, Pollock said: "Sachin sustained a finger injury in the first match against Super Kings and he missed a few matches. Probably that must have upset his rhythm, but he is fast returning to form. Yesterday he scored 74 off 44 balls to show that he is still a destructive batsman."

Pollock also dismissed suggestions that Mumbai Indians have packed the side with too many overseas -- 11 to be precise -- when only four can be fielded in a match.

Asked if the presence of too many reputed match-winners in Mumbai Indians has denied domestic players a platform to showcase their talent, Pollock said: "It is hard to say. We have Rohit Sharma, Ambati Rayudu and Dinesh Karthik, who are experienced so other guys don't get much exposure. We choose a team keeping in mind the best combination that could win the match."

Pollock was also happy that fast bowlers have done well in the fifth season. Five fast bowlers are among the top-seven wicket-takers this season. Of these Lasith Malinga (20), Munaf Patel (12) and Kieron Pollard (11) are from Mumbai Indians.

"Malinga has been the best fast bowler, But Dale Steyn has also done well. It is good to see fast bowlers influencing the game that favours the batsmen," he said.

Comments
Topics mentioned in this article
Cricket Mumbai Indians Indian Premier League 2012 Shaun Pollock
Get the latest Cricket news, check out the India cricket schedule, Cricket live score . Like us on Facebook or follow us on Twitter for more sports updates. You can also download the NDTV Cricket app for Android or iOS.