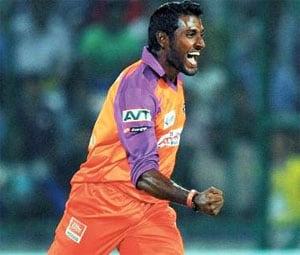 Parameswaran will join the squad at the earliest, the RCB said in a statement.

"We are happy with the induction of Parameswaran in our squad. He will boost our bowling resources during the most critical phase of the ongoing tournament," RCB owner Sidhartha Mallya in a statement.

The pacer was a part of the Kochi Tuskers Kerala outfit in the 2011 season of the IPL.

Comments
Topics mentioned in this article
Cricket Sreenath Aravind Royal Challengers Bangalore Kolkata Knight Riders Sunrisers Hyderabad Deccan Chargers Pune Warriors India Kings XI Punjab Kochi Tuskers Kerala Indian Premier League 2012
Get the latest updates on India vs Australia Series, check out the India vs Australia Schedule for 2020-21 and Ind vs Aus live score . Like us on Facebook or follow us on Twitter for more sports updates. You can also download the NDTV Cricket app for Android or iOS.