Cameron White scored a quickfire half century to help Deccan Chargers register their first win in the tournament, beating Pune Warriors by 18 runs in an Indian Premier League match here on Thursday. 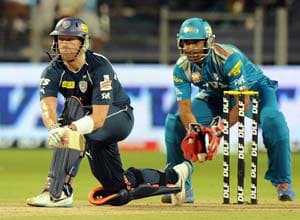 Cameron White scored a quickfire half century to help Deccan Chargers register their first win in the tournament, beating Pune Warriors by 18 runs in an Indian Premier League match here on Thursday.

White smashed a strokeful 78 off just 46 balls and together with JP Duminy (26 not out) added crucial 75 runs for the fifth wicket to power Deccan to 177 for four after electing to bat.

And then Deccan bowlers rose to the occasion for the first time in IPL season five as Pune lost wickets at regular intervals to be retstricted to 159 for seven at the Subrata Roy Sahara Stadium.

The victory is Deccan's first in this year's IPL after five straight loses and a wash out game.

Pune's run chase started on an awry note as they lost their openers - Jesse Ryder and Manish Pandey - inside the 50-run mark.

While the dangerous Ryder fell early with the scoreboard reading just 15, young Pandey showed some sparks in his 21-run knock before being bowled by Theron in his opening over at the team score of 43.

Pune captain Sourav Ganguly (23), who was dropped by Duminy at point on the first delivery of the 10th over by Manpreet Gony, failed to capitalise on the chance as he fell three balls later, caught brilliantly by substitude fielder Daniel Harris at short cover.

Reddy then struck twice in the 14th over to derail Pune's chase.

Reddy first bowled Robin Uthappa as he went for a cheeky shot and then four balls later accounted for a struggling Marlon Samuels, caught by Deccan skipper Kumar Sangakkara.

Steven Smith, however, was in no mood to give up without a fight and struck a few lusty shots before perishing in the 17th over, caught by Duminy off Theron.

Mithun Manhas played a 22-run cameo towards the end but it proved to be too little too late.

Earlier, opting to bat, openers Parthiv Patel (24) and Shikhar Dhawan (16) ensured a quick start to Deccan's innings, smashing Ashish Nehra for three fours to pick up 16 runs off the first over.

The duo stitched together 39 runs off four overs for the opening stand before losing Dhawan.

Deccan received another blow 11 runs later when Patel was caught by Mithun Manhas at deep square-leg off Bhuvaneswar Kumar.

White and Sangakkara shared 33 runs for the fourth wicket before the latter was cleaned up by Sharma.

White, however, seemed in ominous form as he went about his business in style, notching up his first half century of the tournament in just 35 balls with the help of five boundaries and two huge sixes.

In Duminy, White got an able partner as the duo added a massive 75 runs off just 38 deliveries for the fifth wicket to help Deccan post a decent total on the board.

White was the aggressor among the two and clobbered Sharma for a four and two consecutive sixes to pick up 19 runs off the 16th over.

After settling down, it was Duminy's turn to open up his arms and he did that perfectly, hitting Samules straight back over his head for a towering six.

But a ball later, Samuels got the prized scalp of White, caught by Alfonso Thomas at deep cover boundary as the batsman went for another huge one.

Ishant Jaggi remained unbeaten on 10 along with Duminy.

Comments
Topics mentioned in this article
Juan Theron Indian Premier League 2012 Deccan Chargers Ashish Reddy Pune Warriors India Gary Kirsten Anil Kumble Yuvraj Singh Cricket Cameron White
Get the latest updates on India vs Australia Series, check out the India vs Australia Schedule for 2020-21 and Ind vs Aus live score . Like us on Facebook or follow us on Twitter for more sports updates. You can also download the NDTV Cricket app for Android or iOS.