Chris Gayle has been signed by Royal Challengers Bangalore for the next two IPL seasons, an official release confirmed on Friday. 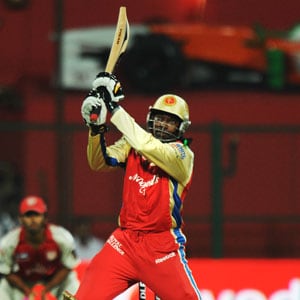 Chris Gayle has been signed by Royal Challengers Bangalore for the next two IPL seasons, an official release confirmed on Friday.

Gayle joined RCB for the 2011 season as a replacement for Dirk Nannes, after remaining unsold in the initial auction. He ended as the recipient of the Orange Cap for being the highest scorer in IPL 2011. He also played for RCB in the Champions League.Â Â

"We are delighted to make Chris Gayle a permanent member of our IPL squad. He is one of the best batsmen in the world. His form helped us qualify for the final of the 2011 edition of the tournament. We are confident that with players like him in our side, we will take the extra step this season, and win our maiden IPL title," said Mallya Jr.

Gayle was equally happy to have got the opportunity to continue in the team.

"I had a great time representing RCB last year. It is a terrific outfit. The players are brilliant. To me, Bangalore has been a home away from home. I wanted to continue playing for them, and it turned out that they were keen to retain my services. I look forward to returning to Bangalore soon," Gayle said.

IPL Chairman Rajiv Shukla said Gayle adds a lot of value to the tournament with his explosive batting.

"Chris Gayle is one of those cricketers who was born to excel in all formats of the sport. He was at his destructive best in IPL 2011, and one can safely assume that we will see a lot more fireworks emanate from his blade, in the forthcoming IPL seasons," Rajeev Shukla, the IPL Chairman, commented.

The fees to sign Gayle, who was a part of the Kolkata Knight Riders in the first three editions of the IPL, has not yet been disclosed.