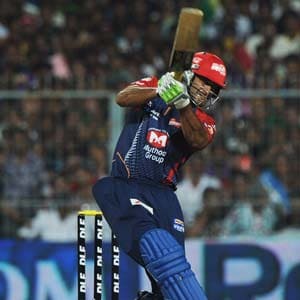 Irfan struck three sixes and two boundaries to help Delhi reach 100 with five balls to spare and make a winning start to their IPL V campaign.

Earlier, Morne Morkel scalped three wickets for 18 runs, while Umesh Yadav and Roelof van der Merwe bagged two wickets apiece to restrict the Knight Riders to 97 for nine after they were put into bat following a two-and-half hours rain delay.

Chasing the small total, Aaron Finch (30 from 27 balls) and Virender Sehwag (20 off 13) gave the Daredevils a solid start putting on 49 for the opening wicket.

The duo did not seem to be in any trouble against the Knight Riders attack as Finch made the bulk of the scoring during the partnership, while Sehwag was content in rotating the strike.

But two quick wickets, after Kallis gave the breakthrough in the form of Finch, brought the crowd back on its feet with the match tentalisingly poised as Daredevils nedded 41 runs off 28 balls to win.

But Irfan and Glenn Maxwell (3 not out) had other ideas as the Indian southpaw paced his innings beautifully to complete a clinical chase.

As the asking rate began to rise with 35 needed from 20 balls, Irfan hit Kallis over long on for a six to bring relief for the visitors.

In the next over, Irfan smashed Marchant de Lange for two sixes to make the chase a routine affair for Delhi.

It was the battle of Yusuf versus Irfan in the very next over, as the younger brother lifted one over extra cover boundary to make the equation two runs from the last over.

Earlier, the Daredevils came up with a fine bowling display to restrict Knight Riders to 97 for nine.

Put into bat after a two-and-half hours of rain delay, the Knight Riders batsmen struggled to get off the blocks against Delhi's bowling attack led by South African speedster Morkel.

Laxmi Ratan Shukla top-scored for the home team with a 17-ball 26, which was studded with two sixes and a lone boundary. He resurrected Kolkata's innings after they were reduced to 54 for five in 6.4 overs.

On a day when their star batsmen including skipper Gautam Gambhir (16), Jacques Kallis (4) and Yusuf (0) flopped, Bengal youngster Debabrata Das impressed with a quickfire 18 from nine balls that included a huge six off Morkel.

The Knight Riders found themselves in alien conditions even at home as the Delhi pace duo of Morkel and Yadav rattled their batting line-up after Van der Merwe gave the visitors their first breakthrough.

Van der Merwe, who shared the new ball with Irfan, gave Delhi the breakthrough in his very first over when he cut short a dangerous-looking Brendon McCullum's (9) stay, trapping him plumb in front of the wicket.

There after Morkel and Yadav reduced Kolkata to 31 for four by the fourth over.

The South African pacer rattled his compatriot Kallis' middle stump with a toe-crushing yorker and followed it up with Manoj Tiwary's wicket in similar fashion in the very next ball.

Yadav then took the prize scalp of Yusuf for a duck to reduce the Knight Riders to 31 for four.

In dire need of a partnership, Debabrata broke the shackles with two sixes - first off Maxwell and then Morkel.

He made his intentions clear hitting the South African speedster over the long on boundary, but his fine innings came to an end because of a misunderstanding with Shukla.